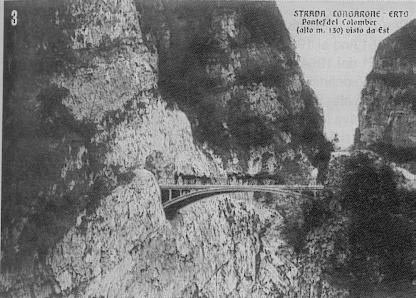 The Vajont (or Vaiont) Dam was completed around 1960 as one of the tallest in the world at 262 meters. In October of 1963 the towering dam indirectly caused one of the most violent man-made disasters in history. When it was all over, between 2,000 and 2,600 Italians had lost their lives. The tragedy became the worst dam disaster in history even though the dam itself did not collapse.

Since 1912, the Vajont River gorge just upstream and downstream of the dam has been home to a varied collection of 6 different bridges including the Vajont Bridge, the Tubo Bridges, the Vajont Dam Footbridge and the Colomber 1912 and 1944 Bridges.

Located 62 miles (100 km) north of the city of Venice, the Vajont river is a tributary of the much larger Piave river which empties into the Adriatic Sea. In late 1960, the 860 foot high (262 mtr) dam became the second tallest in the world when it was completed in a tight gorge of the Vaiont. Known as a double-curved, thin-arch concrete dam, it was and still is the tallest such structure of its type in the world. If Tajikstan’s under construction Rogun dam and Iran and China’s soon to be built Bakhtiari, Xiluodu and Jinping dams are counted, there are 8 dams that are higher than Vajont. Of those, only 5 are concrete and none are considered “thin”. The base of Vaiont is only 74.5 feet (22.7 mtr) thick while the crest is just 11.2 feet (3.4 mtrs) thick.

Sadly there were warning signs that could have avoided the catastrophe. The first occurred in 1960 when a section of mountain a third of a mile (.6 km) wide slid into the river just behind the dam construction site. At the time, engineers became cautious of the potential of a bigger slide and numerous geodetic stations were set up in the valley and observed to be moving about 1 inch (1 cm) a day. By mid 1963, a reservoir more than 3.5 miles (6 km) long had formed behind the 3 year old dam. The steep canyon walls that once rose above the Vajont river were now under hundreds of feet of water. The region is composed of mostly limestone rock layers carved by glaciers thousands of years ago. Much of this rock is held together by frictional bonds. Consistent rain in late September and early October of 1963 produced an excessive inflow of groundwater to the region. The movement had increased to 6 inches (15 cm) a day in late September, 1963 to as much as 16 inches (40 cm) by October 2nd. Then about October 8th, engineers noticed all the observation stations were moving together in one uniform mass in an area 5 times larger than originally noticed. They suspected a small slide might occur by mid November but would only cause a wave 65 feet (20 mtr) high. Dam workers began to lower the reservoir level on October 8th in anticipation of a slide and the mayor of the tiny town of Casso on the north slope above the dam area ordered residents to evacuate. The reservoir and ground water had reached their highest levels since the dam was built. The ground on both sides of the rising reservoir became weakened due to an increase in hydrostatic uplift which reduces gravitational friction in the rocks. Further creeping of the hillside from ground water migration continued to weaken the rock fractures and seams within the bowl shaped valley and on the night of October 9th, 150 million tons of the mountain descended into the reservoir in a massive slide a mile and a half (2.6 km) wide. Millions of tons of water thundered over the top of the dam and down into the gorge toward the towns of the Piave river valley 1 mile (1.6 km) away. The people never had a chance when a wall of water 200 feet high (61 mtrs) wiped everything out.

In addition to the great loss of life, a concrete arch maintenance and water pipe bridge located directly below the suspension footbridge was also wiped out from a wall of water reported to be more than 328 feet (100 mtrs) above the crest of the dam and more than 1,000 feet (305 mtrs) above the bottom of the canyon. Today you can visit the dam and walk across the new strut frame bridge that was built on the same alignment as the concrete arch. I do not have exact length or height figures of the suspension footbridge but the north side foundation that supported the tower and the south side where the cable terminated into a rock cliff are likely to still exist. My figures are based on dam engineering drawings and photos. The bridge may have been as high as 755 feet (230 meters). The suspension footbridge would never be rebuilt and remains the highest of its type ever made. 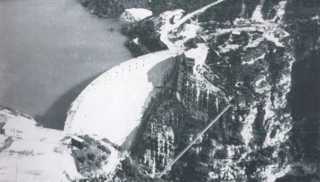 The Vajont (or Vaiont) Dam footbridge is the second highest bridge in the world to ever become defunct. The simple footbridge has a tower to tower span of approximately 140 meters with a deck approximately 130 meters long.

Image by Eugenio A. Merzagora

An aerial view of the intact dam and flooded valley after the slide disaster.

A view of the 3 high bridges downstream of the dam construction site including the Vajont Dam Footbridge in the upper right and the Tubo and Vajont arch bridges down in the gorge. Image by www.altratecnica.it. 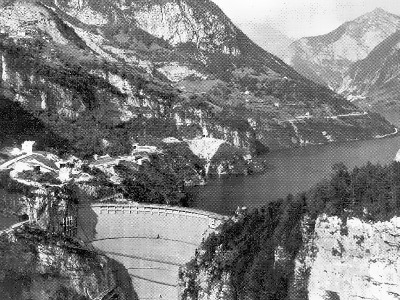 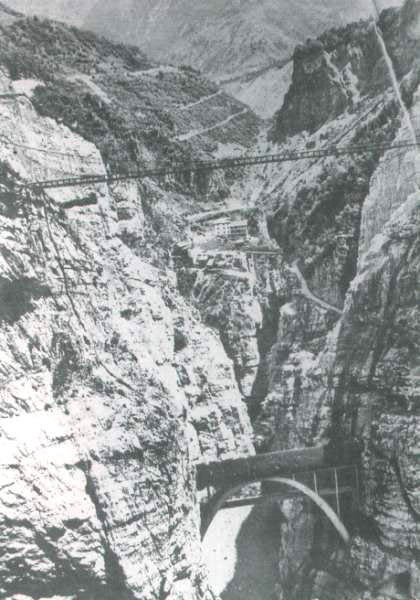 The Vajont Bridge survived the 1963 slide so it is not clear why it was ever removed.

Upon its opening in 1912, the 40 meter concrete arch of the Colomber Bridge become Italy's highest roadway span with a deck 130 meters above the Vajont River. Some sources claim it was as high as 138 and 150 meters but the lower height figure more closely matches topogrpahic map lines. 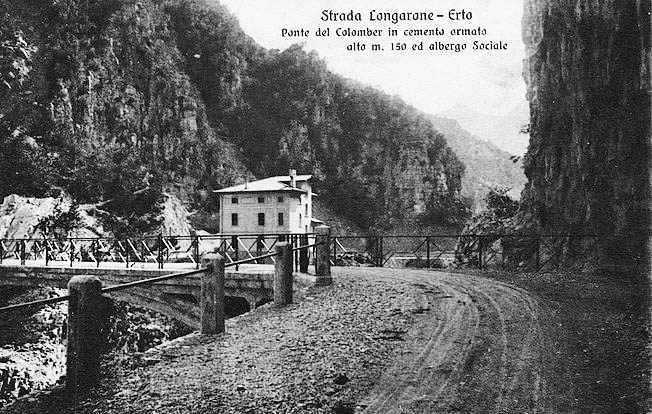 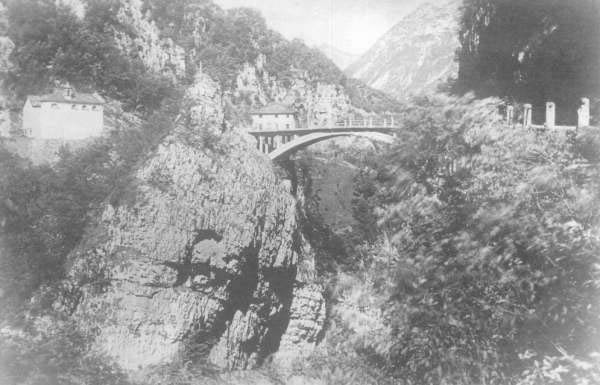 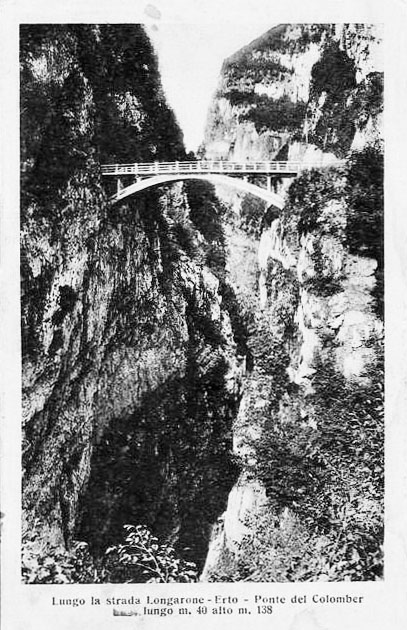 In 1944 the 32 year old concrete Colomber arch was blown up by a group of German prisoners in the Bus de Bacon. A timber Fink truss replacement was quickly built with additional support from suspension cables. 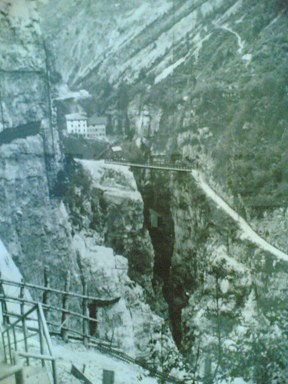 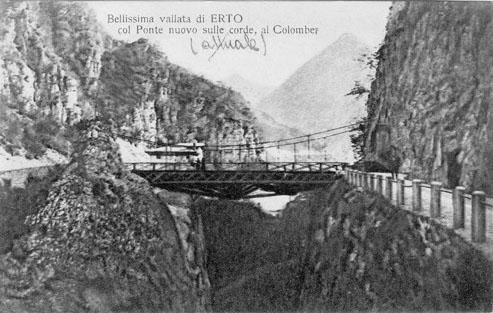 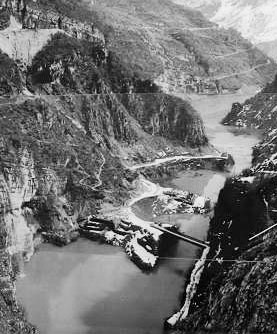 The rising Vajont reservoir level has nearly submerged the timber Colomber Bridge. This photo was taken in either 1960 or 1961. 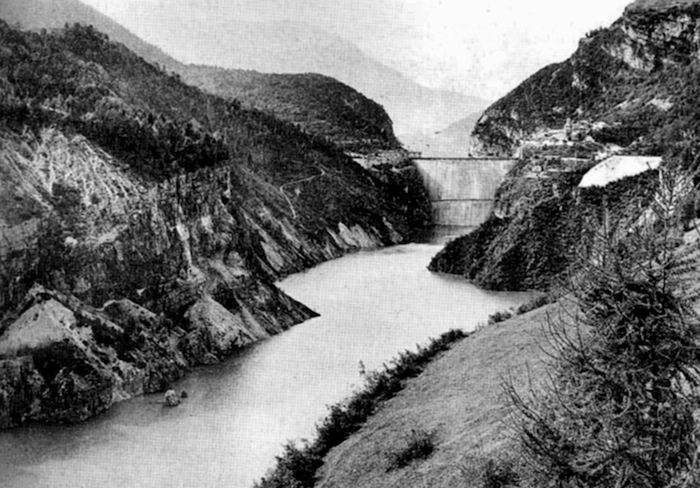 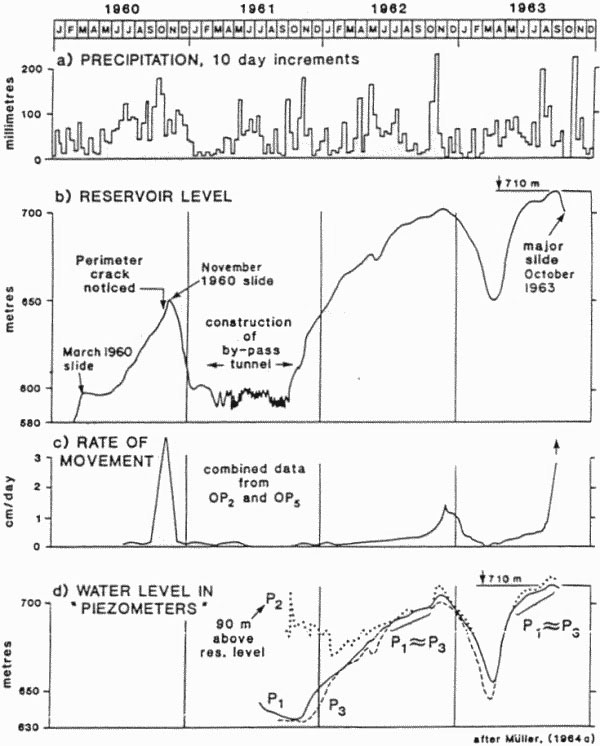 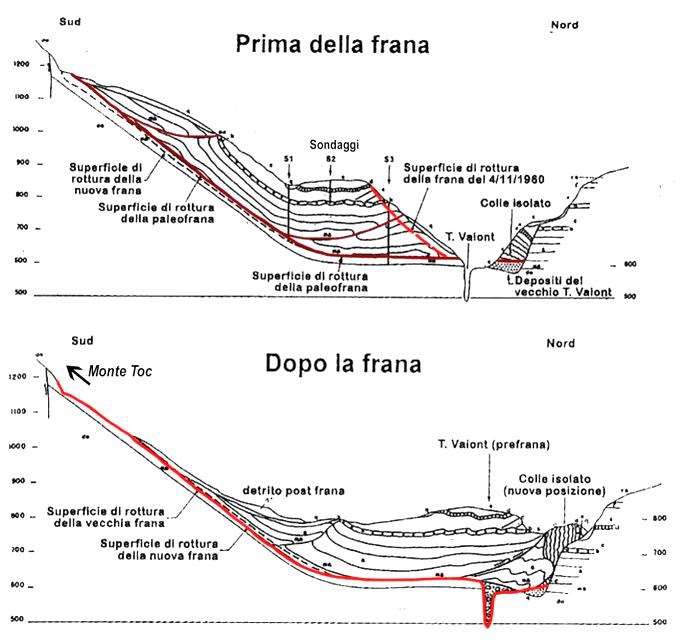 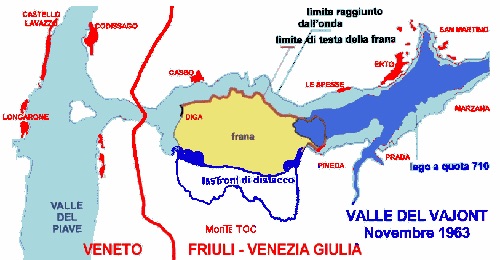 Longarone town before the flood. 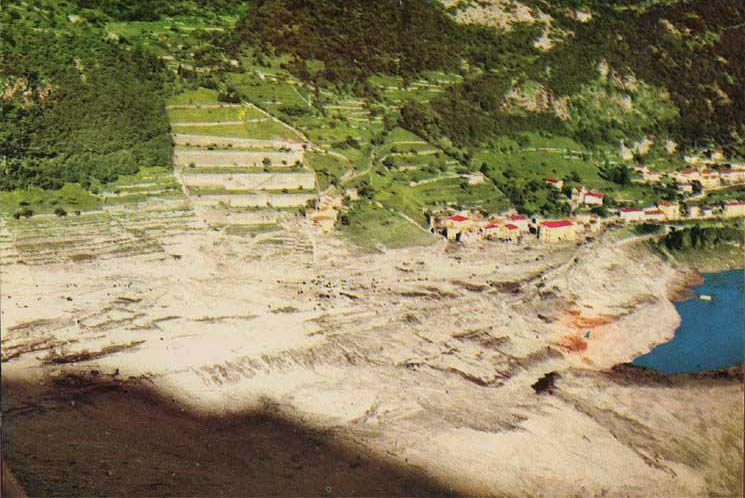 Longarone town after the flood.