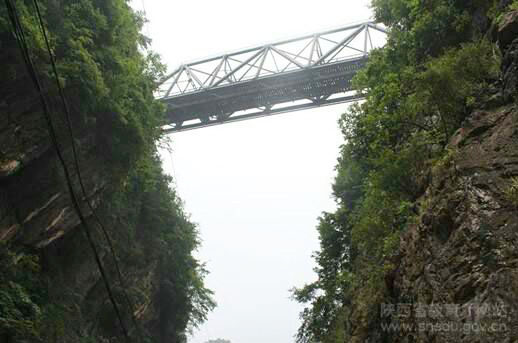 It should be noted the city of Xiangfan is now called Xiangyan hence the current line name of Xiangyan-Chongqing Railway line. The length is quoted by Wikipedia to be 895.3 kilometers. The line was electrified in 3 phases from 1980 to 1998 and a second completely new track route was completed in 2009. This new line is more direct measuring only 507 kilometers in length and capable of trains as fast as 160 km/h.

Xiangfan-Chongqing Railway, 859.6km long, was constructed from 1968 and was formally opened to traffic in June 1978. Xiangfan-Chongqing Railway runs across Wudang Mountain, Daba Mountain and Huaying Mountain. There are 405 tunnels with a total linear length of 287km on the railway line, including 12 tunnels with more than 3km length, 2 tunnels with more than 5km length, 7 three-track tunnels and 2 4-track tunnels. No. 2 Daba Mountain Tunnel, 5.334km long, is the longest tunnel on the railway line. The tunnel-line ratio of the railway is 33.4%. In particular, the tunnels on the 276km-long section of the railway line in Shaanxi Province have a total linear length of 172km and the tunnel-line ratio of the section is 62%. Of the 90 stations on the railway line, 36 stations are constructed in tunnels or on bridges. The tunnel construction is mainly carried out by top and bottom heading and hopper-shed tunneling method by means of light-duty machinery. Normally long tunnels are complemented with auxiliary heading to speed up the progress. Besides monolithic lining, shotcrete lining, semilining and arch flank wall are also used. 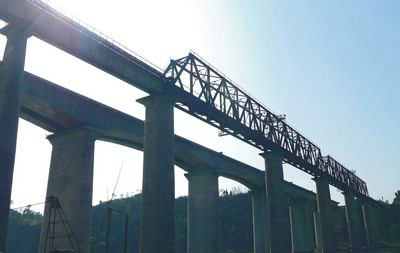 A view of one of the older and newer bridges along the Xiangfan-Chongqing Railway line.