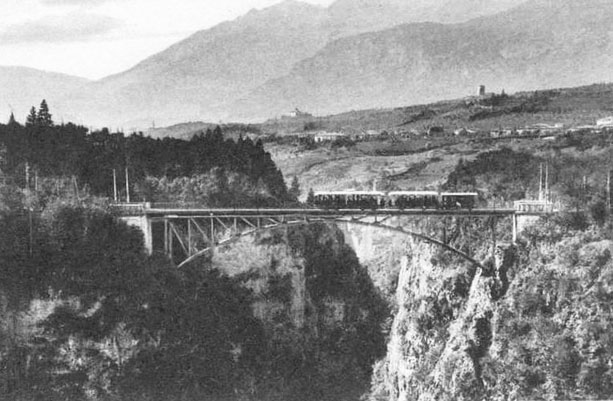 Right next to the Giustina dam, at the site of the original steel arch bridge, a concrete arch bridge was built in its place to carry a two-lane road across the gorge. It is Europe’s fifth highest arch bridge. Another spectacular crossing on the Ferrovia Trento-Malé is located just beyond the north end of Lake Giustina where the side by side Mostizzolo rail and road bridges cross 280 feet (85 mtrs) and 262 feet (80 meters) above the river near the town of Cis. Both of these arches are replacements of earlier bridges. Yet another high bridge not to be missed is the spectacular Castellaz bridge, a concrete arch that cuts across the north end of Giustina Lake between Cles and Cis.

A view of the 1959 concrete railway arch that bypassed the 1890 truss steel arch bridge. Image By V. Guaglianone. 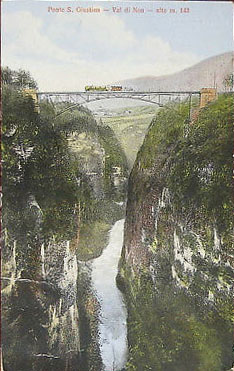 The original Santa Giustina Railway arch from 1890 that was replaced by a concrete road arch that now crosses right next to a dam.

The valley as it looked before it was submerged under 400 feet (122 meters) of water.