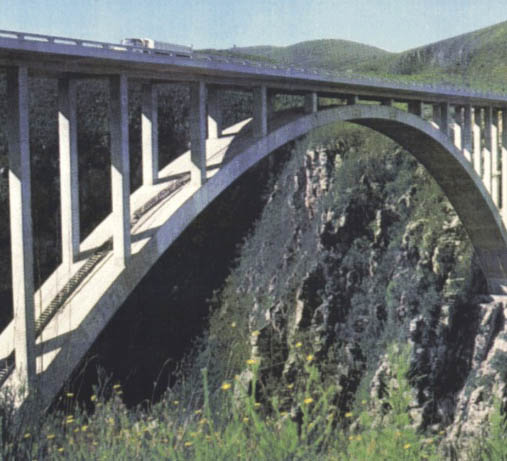 Located along South Africa’s beautiful N2 Garden route, the Bobbejaans is one of 5 giant concrete arch bridges that cross several deep rifts along the southernmost coast of the African continent. The largest of all is the massive Bloukrans bridge - Africa’s highest bridge ever at 708 feet (216 mtrs) and the home of the world’s highest bridge bungee jump. This is also the only highway in the world outside of China or Italy to have 3 bridges in excess of 500 feet (152 mtrs) in height.

The 558 foot (170 mtr) high Bobbejaans bridge is just 2 miles (3.2 km) west of its counterpart over the Groot River. These two brawny bridges are more than just next door neighbors. In addition to having similar designs, both are nearly the same height above the river and both cross deep, narrow crevasses. On almost any other highway in the world, either bridge would be a must-stop-photo-spot but their proximity to the much larger Bloukrans bridge 10 miles (16 km) to the east has made them a redundant stop off on a road of many eye-catching, scenic wonders.

This large collection of curved concrete begins 25 miles (40 km) west of Port Elizabeth with the 417 foot (127 mtr) high Van Stadens bridge. Continuing another 80 miles (129 km) further west is the Paul Sauer bridge, crossing 394 feet (120 mtrs) above the Storms River. Finally, after traveling another 20 miles (32 km) along the N2, the three highest bridges of all show up in a triumphant triumvirate of successive crossings over the Bloukrans, Groot and Bobbejaans Rivers. Bobbejaans was designed by Freeman Fox & Partners along with Watermeyer, Legge, Piesold & Uhlmann.

From an engineering viewpoint, the most interesting of these 5 high arch bridges may well be the Paul Sauer bridge across the Storms River on the border between East Cape and West Cape, South Africa. Completed in 1956, the Ricardo Morandi designed bridge was built 15 years prior to Van Stadens and 28 years before the 3 Bloukrans-area arches came along in 1984. Storms River is unusual for having inclined spandrel supports that radiate out from the main arch rib. The approach supports are also inclined in the opposite direction - balancing out the profile of the entire bridge. The use of inclined supports is a Morandi trait visible on nearly all of his bridges.

Not so evident is the unique construction method by which Morandi built the bridge. Instead of using a highline and adding segments of the arch until the two halves meet in the center, Morandi had both sides of the arch built vertically above the foundations with a climbing formwork on either side of the canyon. The two sides were then carefully tilted outward over the gorge until they could rest on each other at the crown. There are several concrete arch bridges in China that have recently been constructed this way.

If you have the time, there is also a hike down to a small suspension footbridge across the mouth of the Storms River. 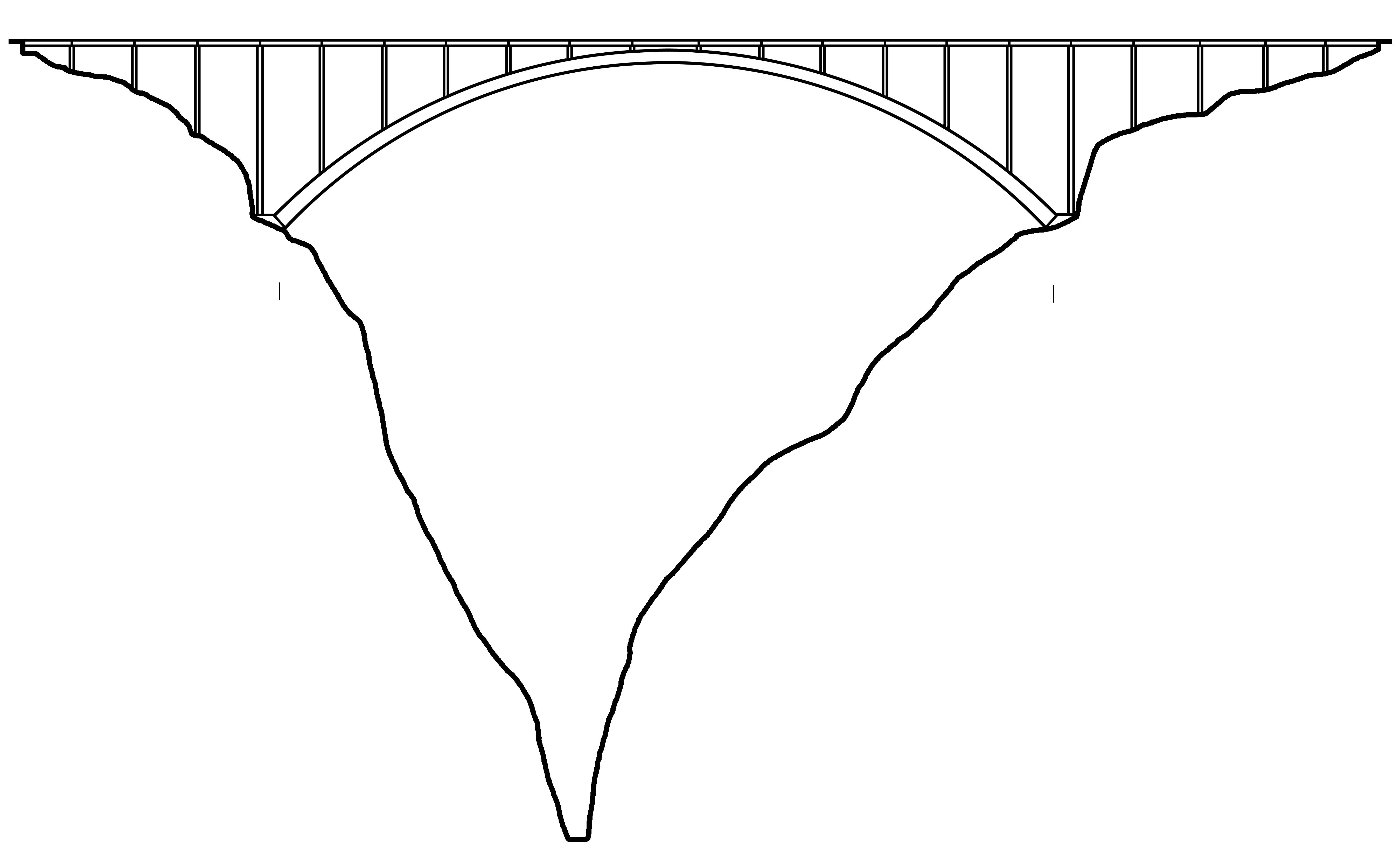 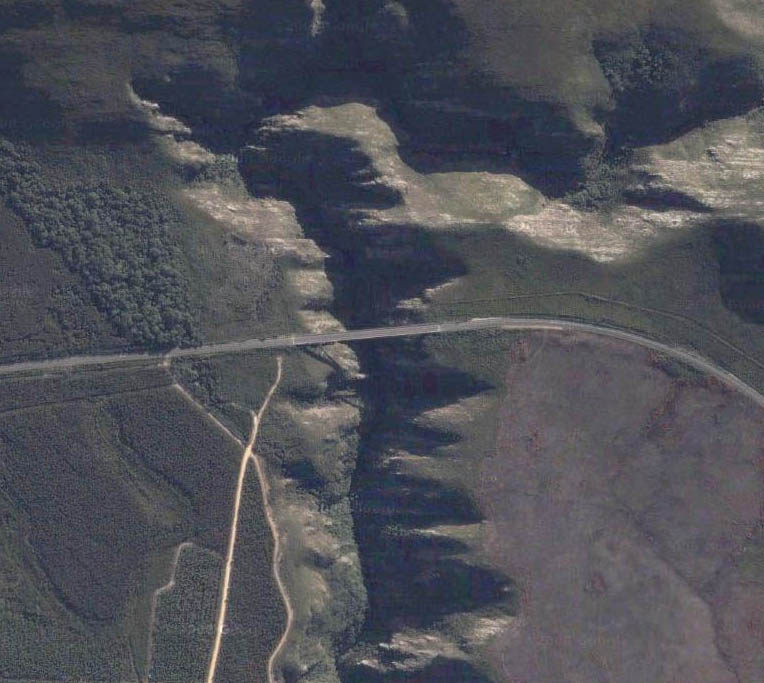 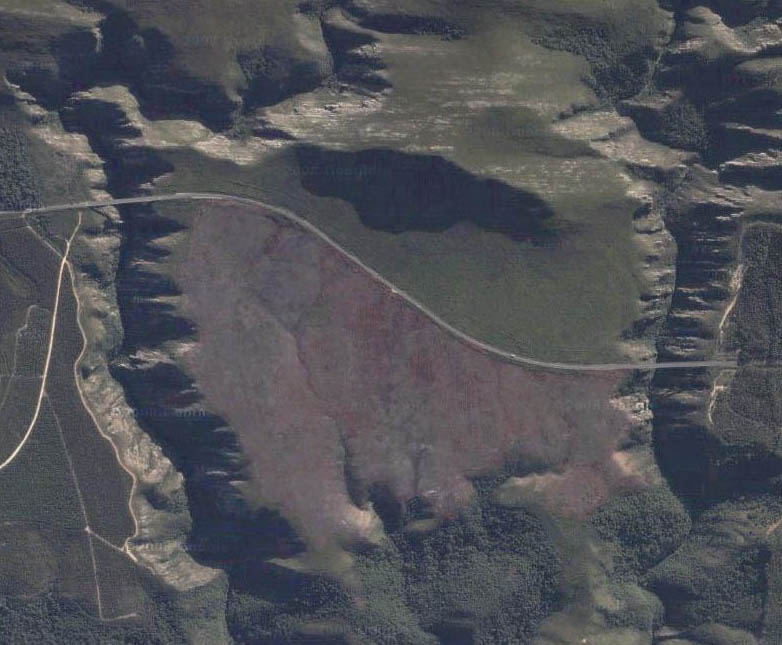 An aerial view of the 2 arch bridge crossings over the Bobbejaans and Groot Rivers. Both spans are nearly equal in height. 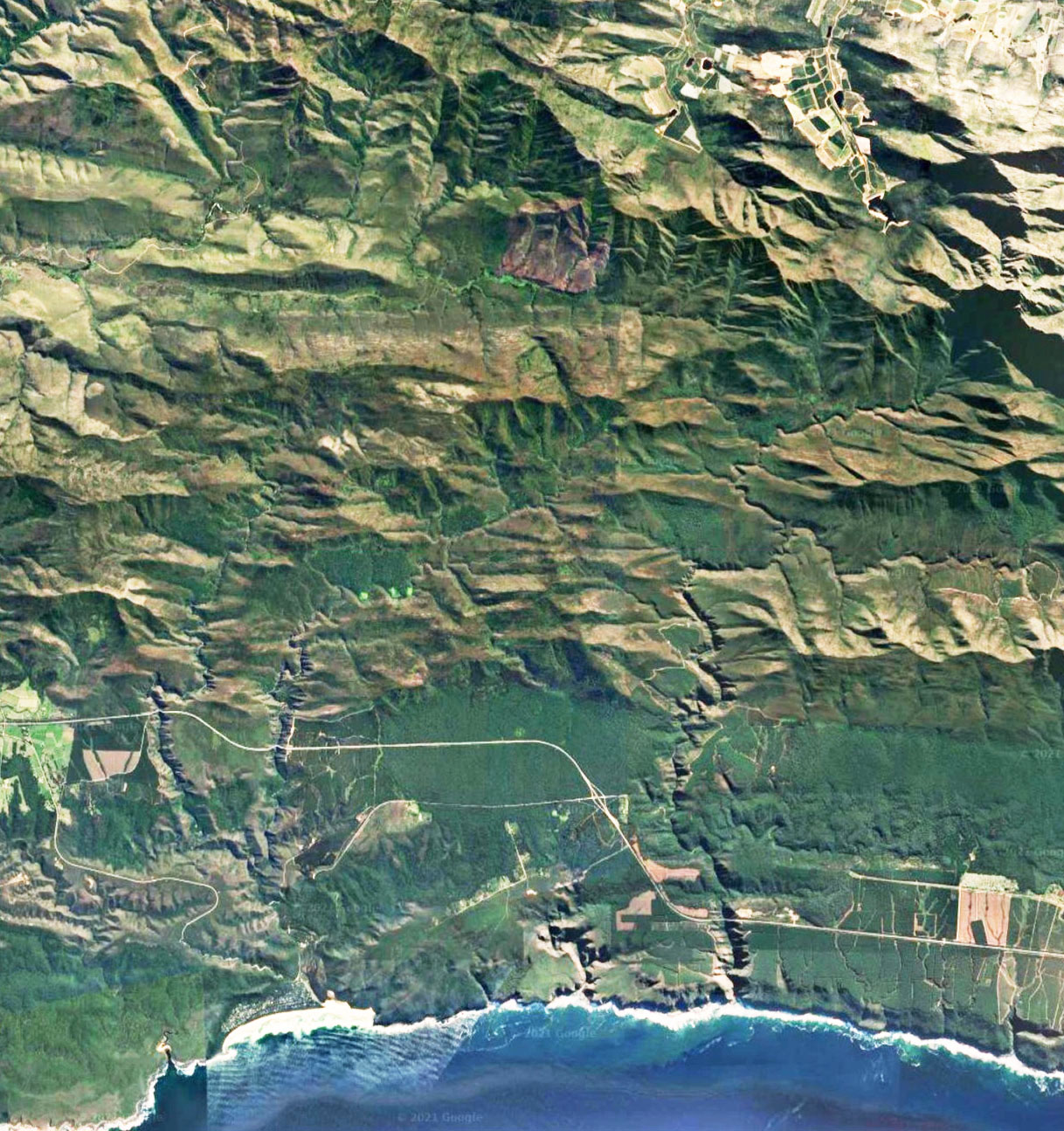 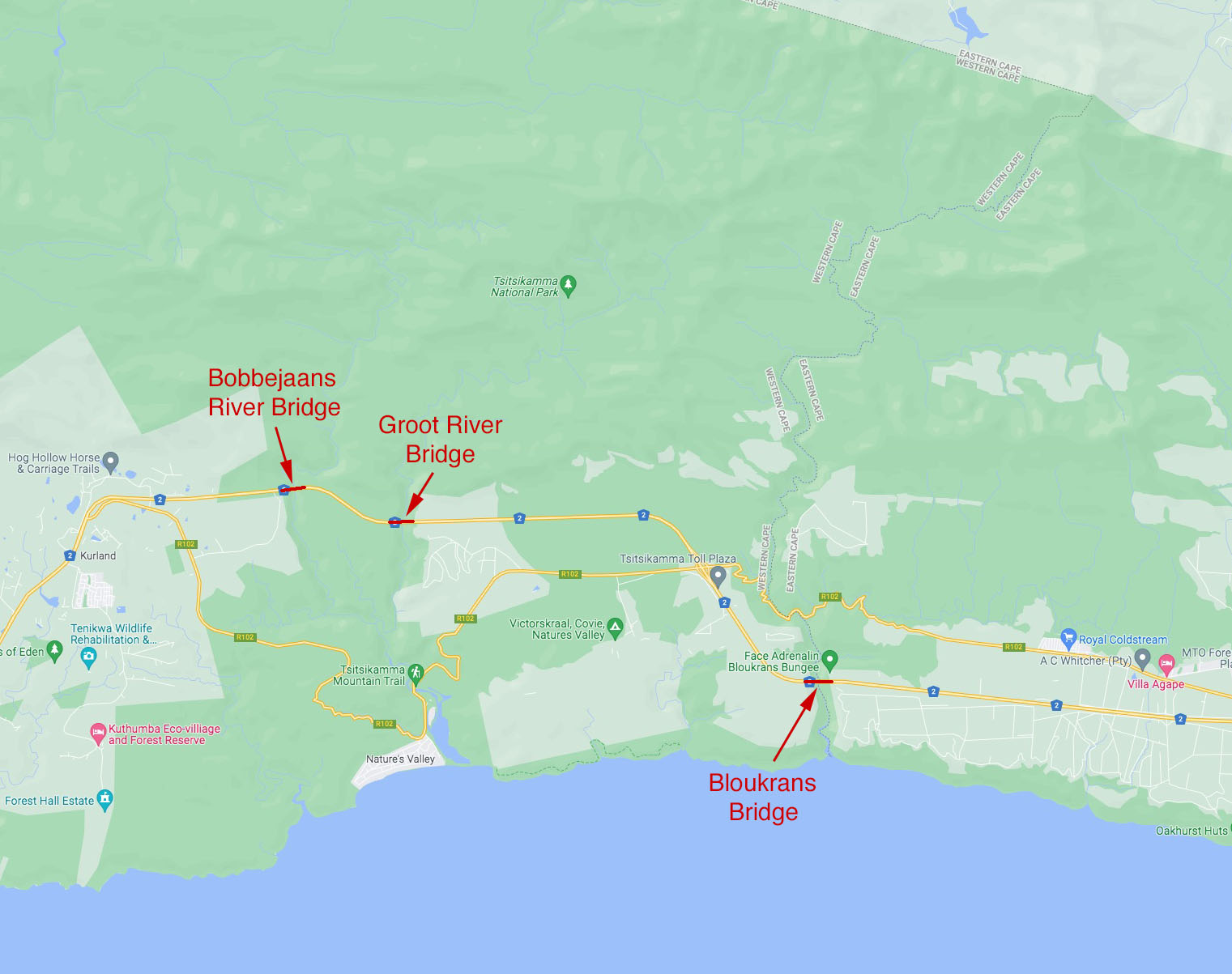 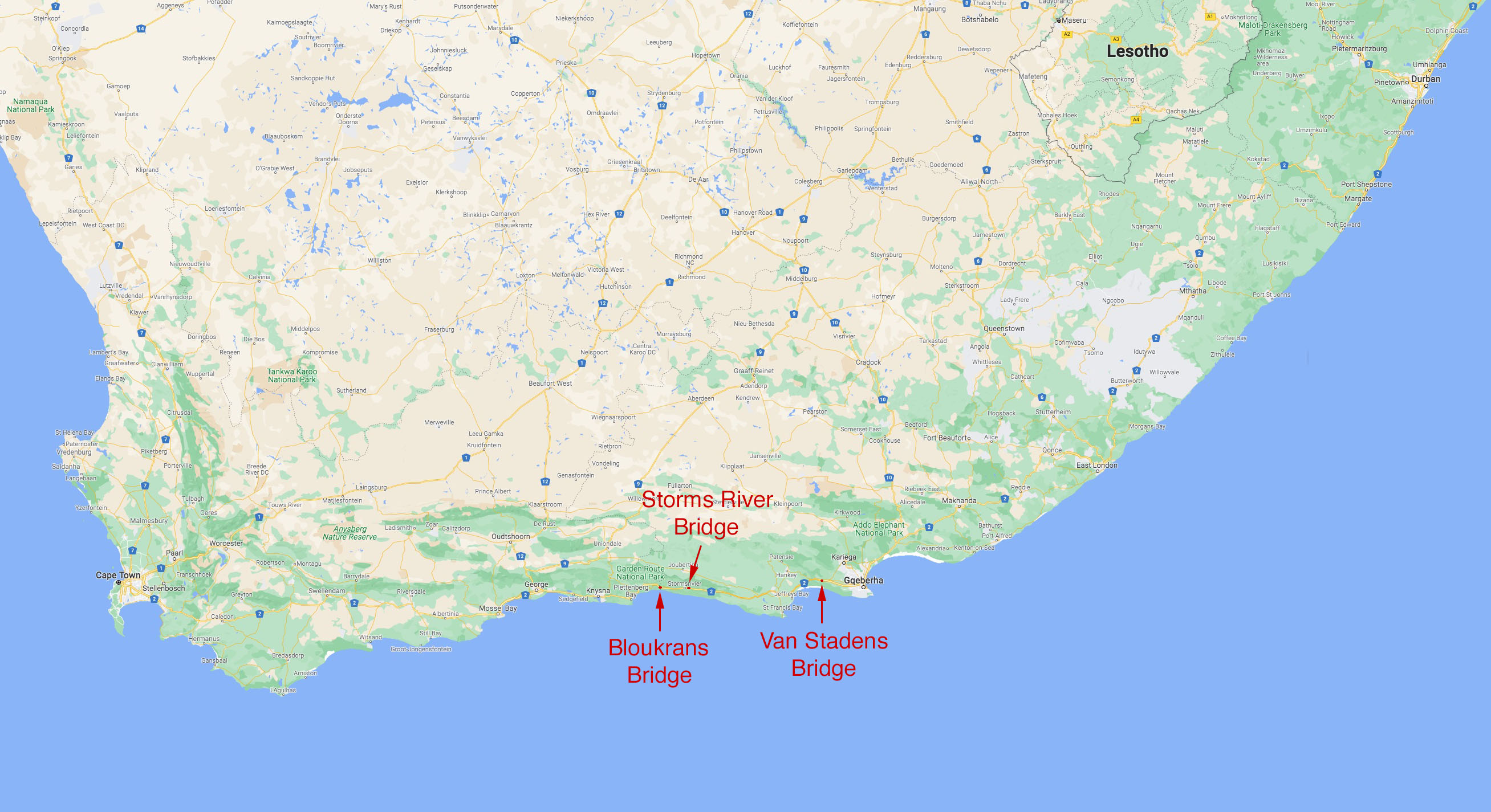