No other high bridge in history caught the eye of the media more than the opening of the Millau Viaduct in 2004. Comprised of 8 consecutive cable stayed spans totaling 8,100 feet (2460 mtrs), the viaduct is the tallest bridge structure in the world with a pier and mast rising a lofty 1,100 feet (335 mtrs) above the ground. With a roadway 909 feet (277 mtrs) above the Tarn River, it is also the highest cable stayed bridge in the world, a record it will retain until 2012 when Mexico’s Baluarte bridge opens. Despite being the highest bridge in Europe, the massive structure ranks only 13th among all high bridges of the world. The bridge has rightfully been described as beautiful, breathtaking, spectacular and awe-inspiring.

Located near the southern end of France, the bridge was the last major connection on the A75 motorway, a 4-lane highway that has been under construction in one form or another since 1975. Several routes were proposed that would have put the Tarn River crossing either east or west of the small town of Millau.

The design of the bridge began in 1991 with Michel Virlogeux, an engineer who at the time was working with the engineering firm Setra. Later, a design competition refined his initial multi-cable stayed concept further. This pared the team down to a handful of firms led by Bernard Gausset of EEG, Sogelerg and Serf along with famous British architect firm Norman Foster & Partners. This group continued to change the basic design until a committee of experts, politicians and specialists officially approved the 8-span cable stayed scheme in April of 1996. A final set of plans would take two more years of design and testing.

Construction began in October of 2001 and took a little over 3 years - exceptional for such a large, complicated undertaking. The bulk of the construction was undertaken by Eiffage, one of France’s largest building contractors. The steel wire cable stays were installed by Freyssinet. Several other consortiums worked on the project from France and several other European countries including Spain, Italy and Sweden.

The 3 year construction period had many unique challenges, the most significant being the unusual launching of the roadway. Instead of cantilevering the road deck outward in small sections from each of the 7 tall pylons, the deck was constructed on flat land on the north and south sides of the bridge in two large sections. Hydraulic jacks on the tops of the piers were then synchronized to move the entire deck out over the valley in small increments of about 2 feet (600 mm). Both sides eventually met over the Tarn river. To make this method work, massive temporary intermediate piers were built to prevent bending of the thin deck since the cable stays and masts above the roadway would not be erected until the entire deck was in its final position. The only exception to this was for the two river spans where the masts and several of the stays were erected on land and went along for the ride across the piers before finally meeting 890 feet (271 mtrs) above the Tarn River.

Other technical advancements that are less obvious to the eye include an array of movement and motion sensors including anemometers, accelerometers, inclinometers and extensometers. Data collected from these devices will help engineers pinpoint potential trouble spots and unwanted wear and tear that could shorten the life span of the many bridge components.

While most of the visual impact of the viaduct comes from the 7 cable stayed “sails” that seem to float across the valley, much of the structure’s greatness comes from the more subtle details that were incorporated into the design. The tall, slender piers have an unusual elegance from a narrow opening that gradually splits the column into two before closing up again within the mast above the road deck. The roadway has a slight curve that adds a third dimension of shape to the structure and offsets the boredom of repetition. The designers even made the best of an unfortunate requirement to install a tall wind barrier along the edges of the roadway with a stylish aerodynamic shape that still allows for a fantastic view of the valley beyond.

As a nearly perfect blend of art, architecture and engineering, the Millau Viaduct will continue to inspire not only the public but future engineers who are continually challenged by the demand to create beauty and grace within the confines of functionality and cost. 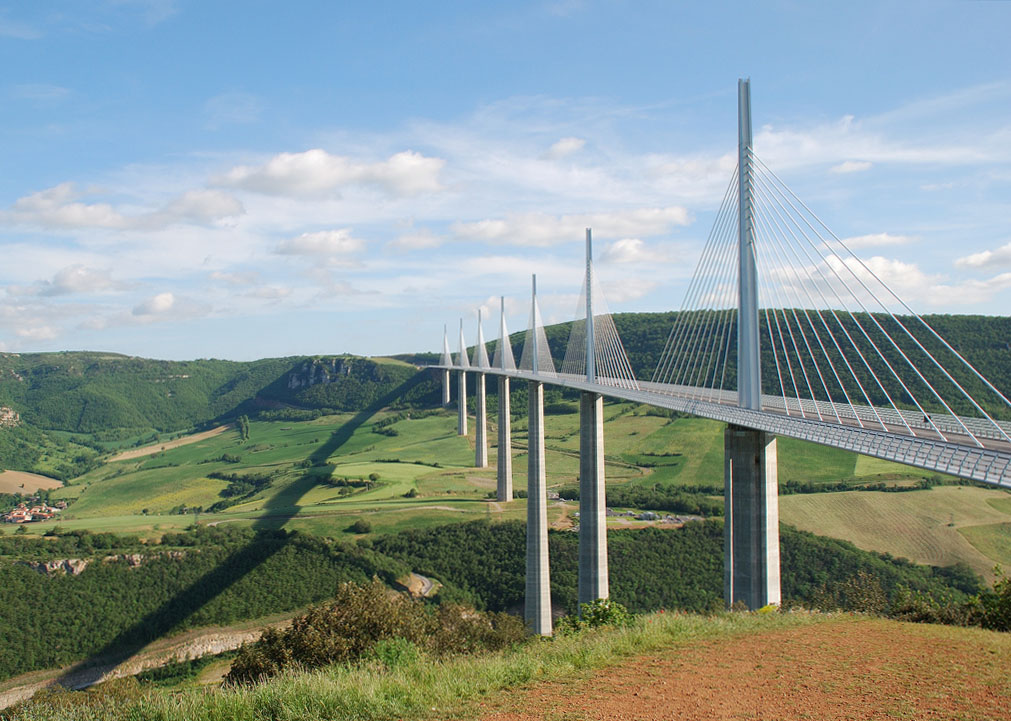 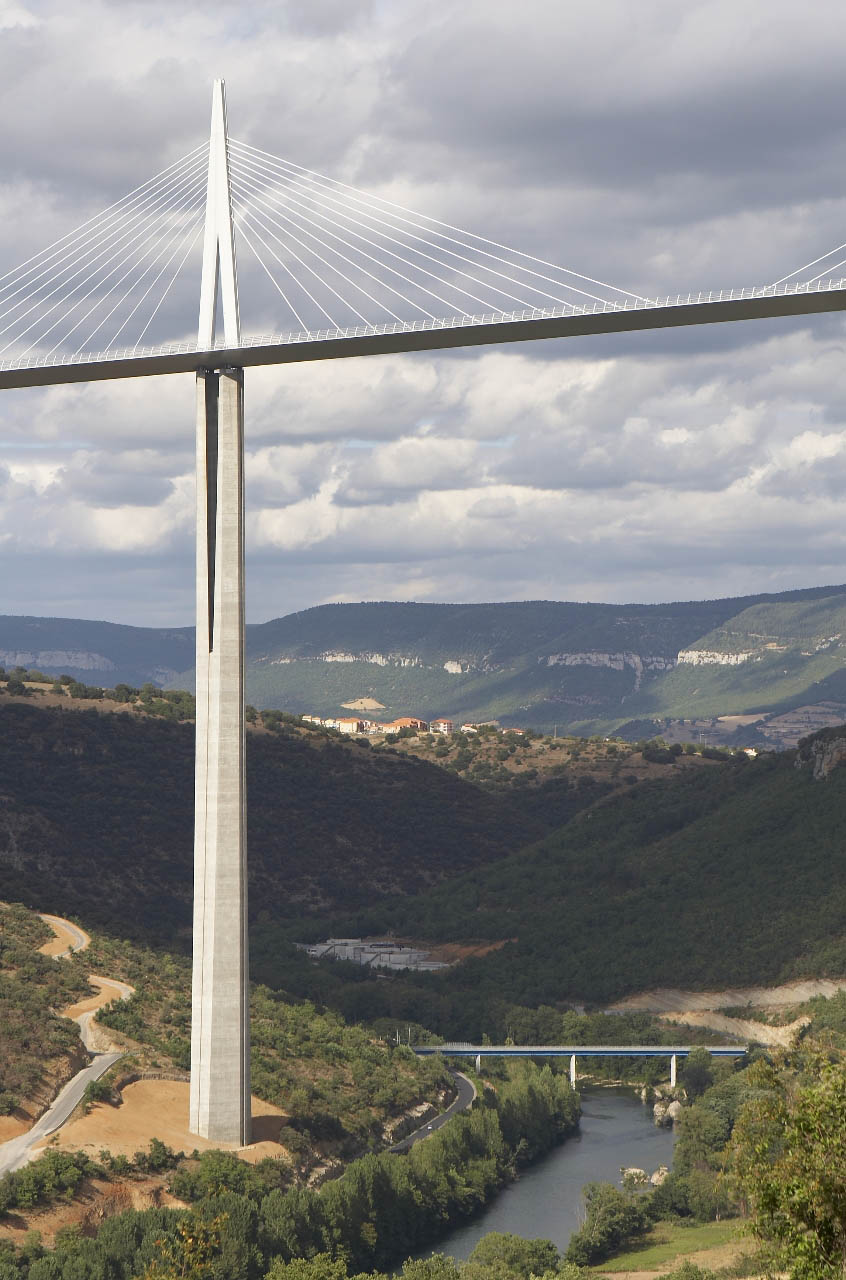 Prior to Millau's record breaking bridge piers of 245 meters, the history of these towering structures has been almost entirely in Europe outside of two U.S. spans. Before Millau the 178 meter piers of Germany's Kochertalbrücke held the record for 25 years. Before Kocher the tallest were the 147 meter pier of Italy's Rago Viaduct. Austria held the record before Rago with the famous 145 meter tall pier of Europabrücke. Before that California's Pit River Bridge had the tallest at 109 meters.

Before California's Pit River crossing, the tallest purely concrete and stone pier was on France's Fades Viaduct at 92.3 meters along with Switzerland's 99 meter tall Sitter Viaduct (depending on where you measure the top). Prior to Fades and Sitter the tallest bridge pier was the all steel 97.5 meter main tower of the Gokteik Viaduct in Burma. Before Gokteik the tallest steel bridge pier was the central tower of the Kinzua Viaduct at 87 meters. Before Kinzua the 1862 Grandfrey Viaduct of Switzerland held the record with steel and stone piers 79.5 meters high. In 1857 the Crumlin Viaduct was the tallest with purely steel piers 64 meters tall while the 1856 Sitter Viaduct had stone and iron piers of approximately 56 meters in height. The 1852 Portage Viaduct had masonry and timber piers of 67 meters. Prior to Portage there were few true "piers" of great height, only stone aqueducts such as the Pont Roquefavour in France and the Ponte Delle Torri in Spoleto, Italy with structural heights of 82 meters. Spain's Puente Nuevo or New Ronda Bridge also has a structural height in the 100 meter height range though the masonry walls hug the sides of the gorge cliff more like a giant foundation then a true stand-alone pier or aqueduct. 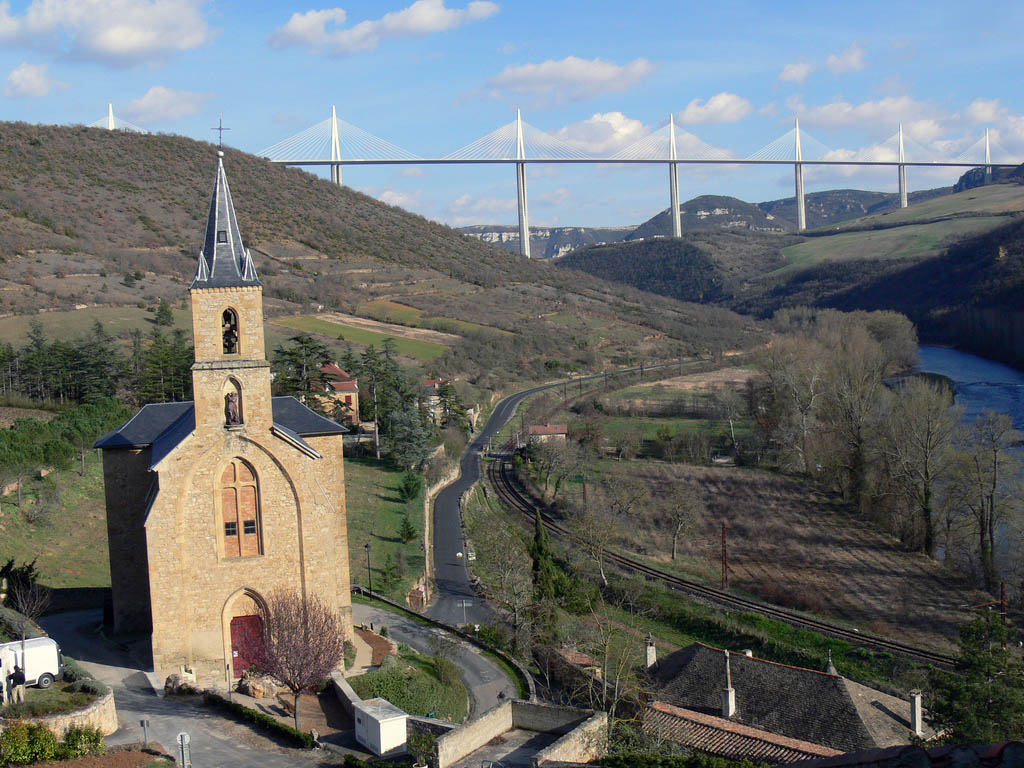 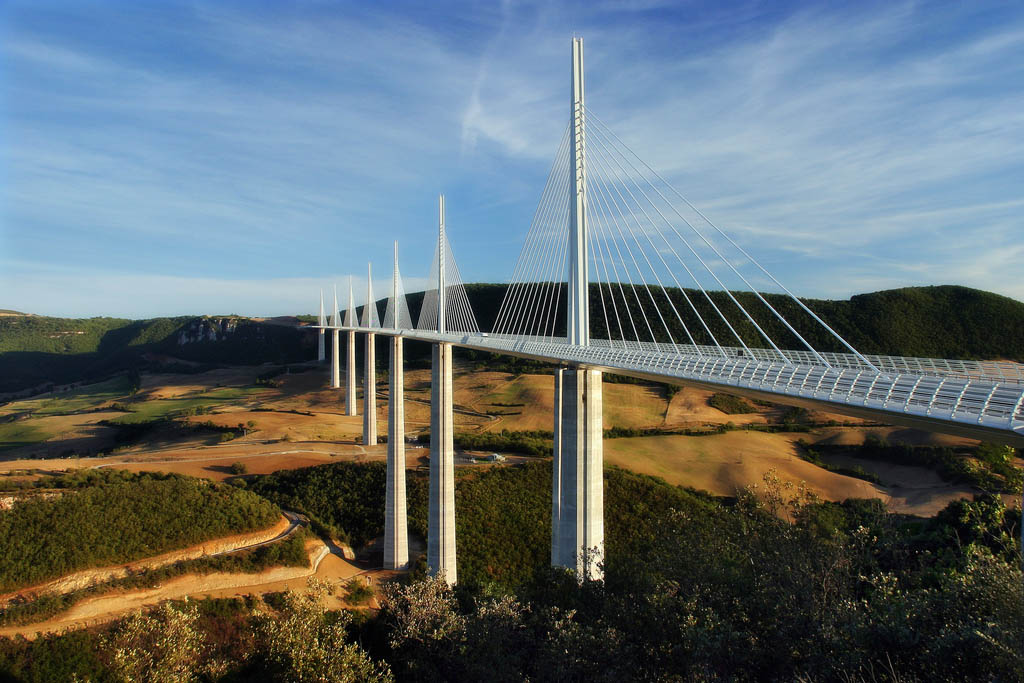 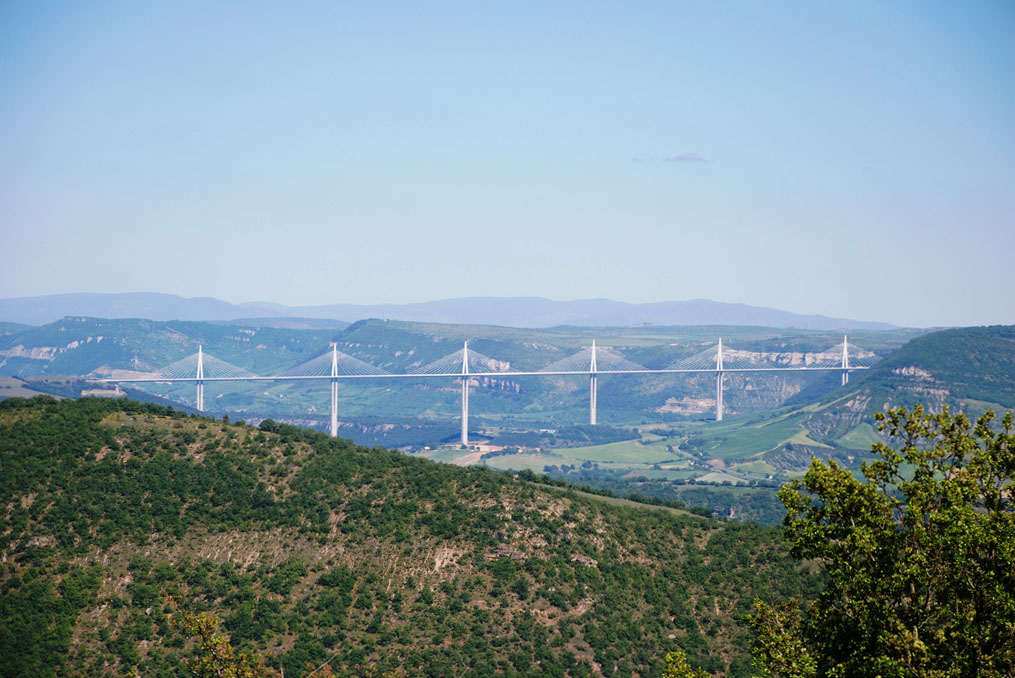 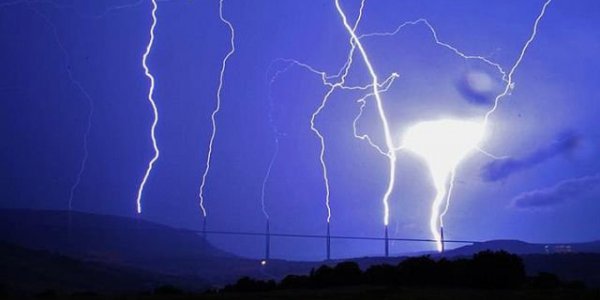 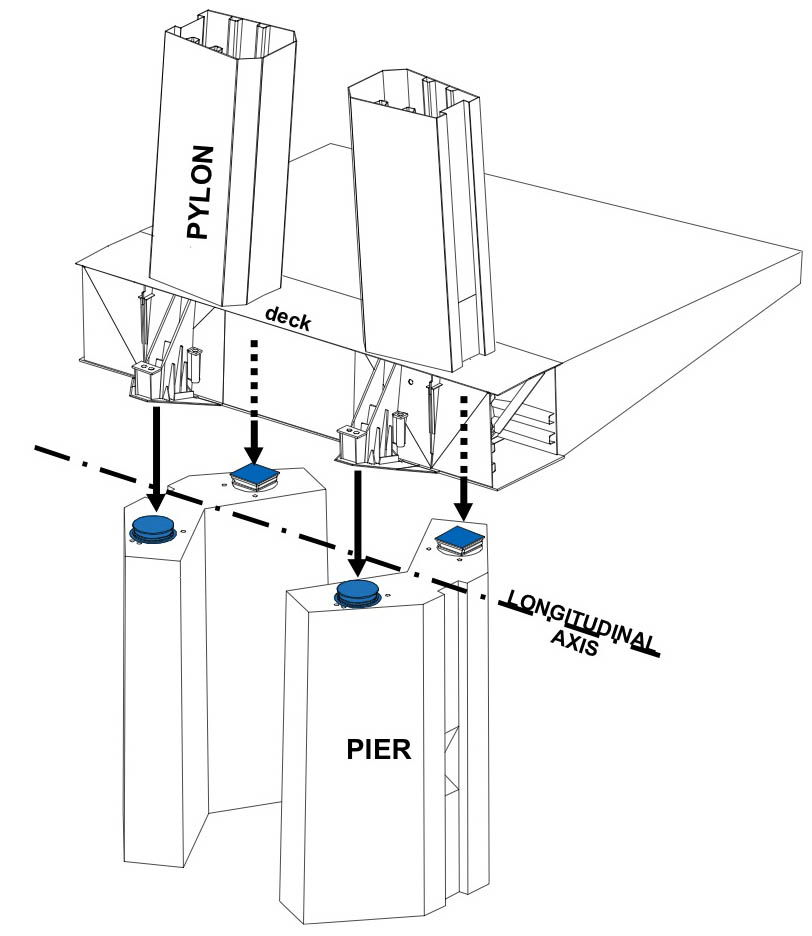 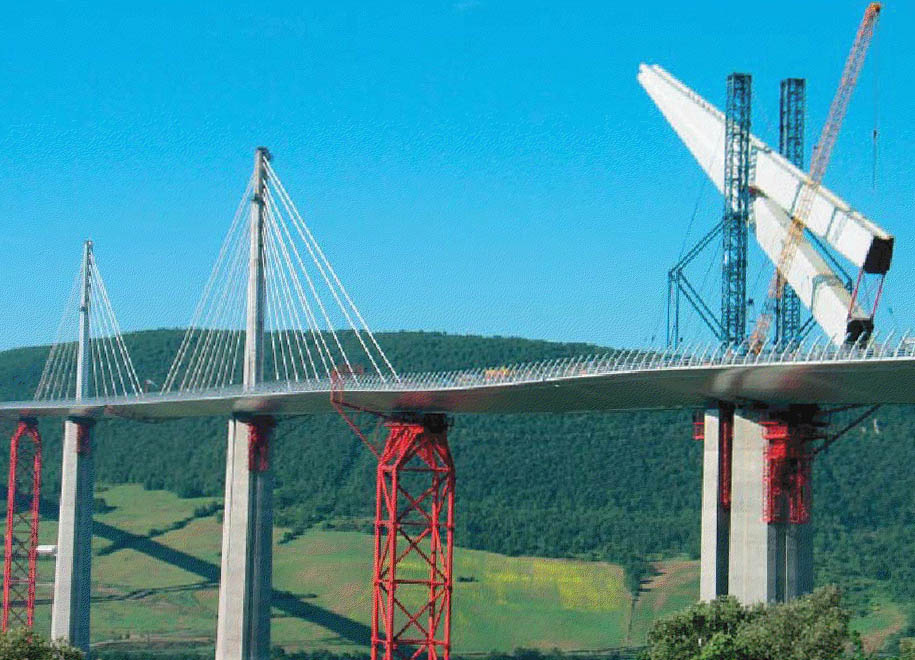 A view of the deck during the launching phase with visible deformations prior to the tower and cable stay erection. The bending of the deck was calculated by the engineers before construction. 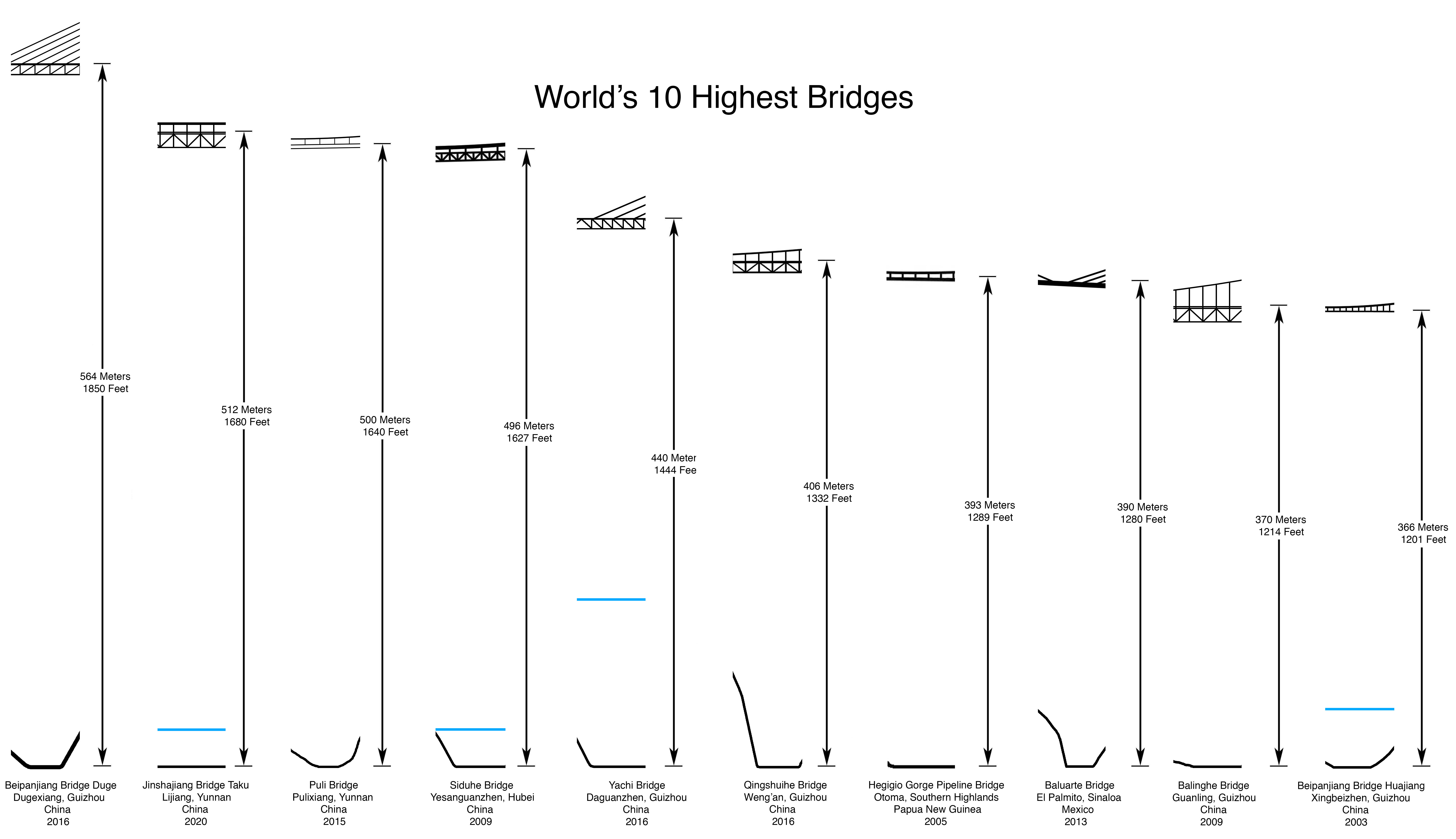 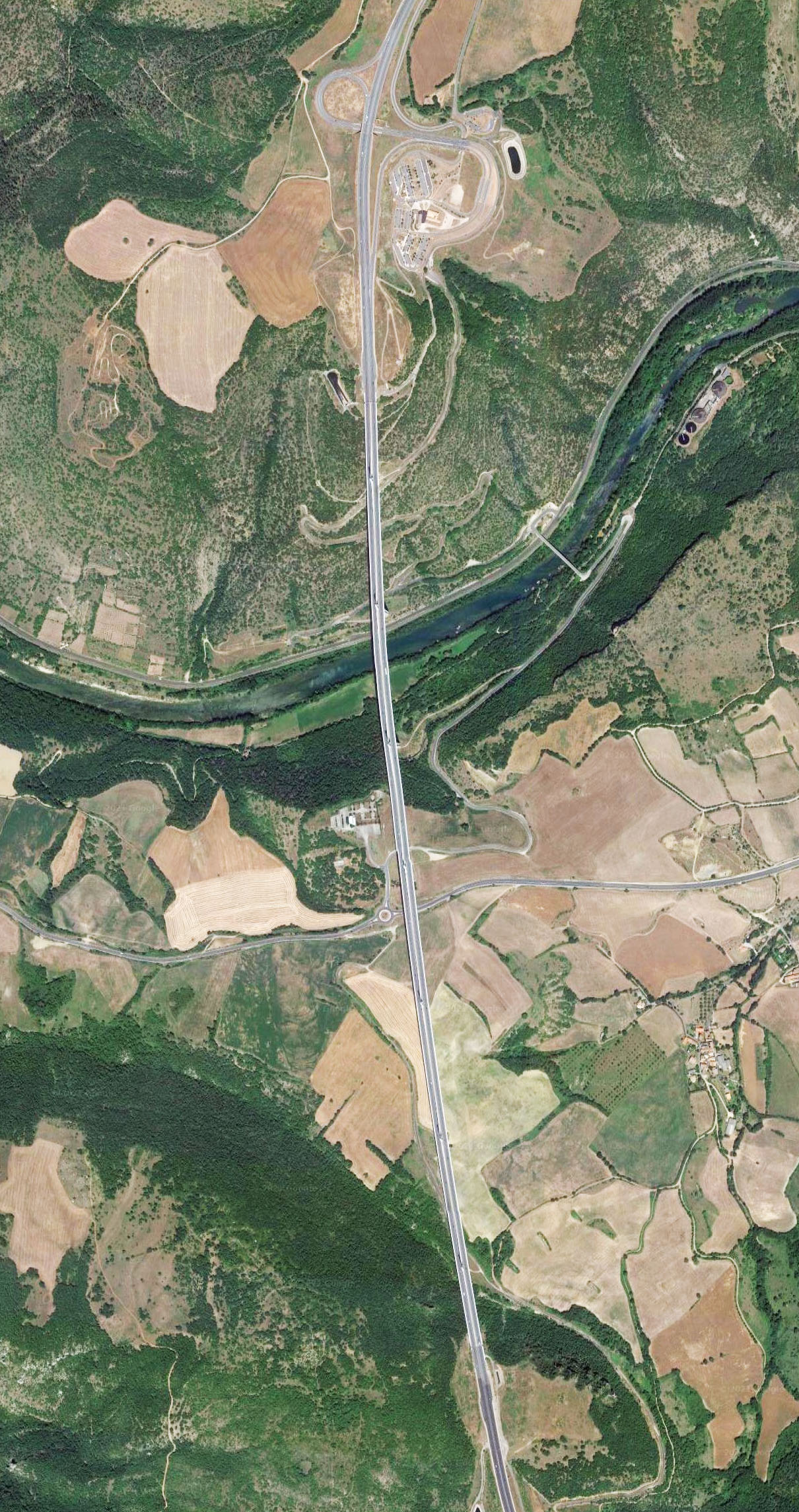 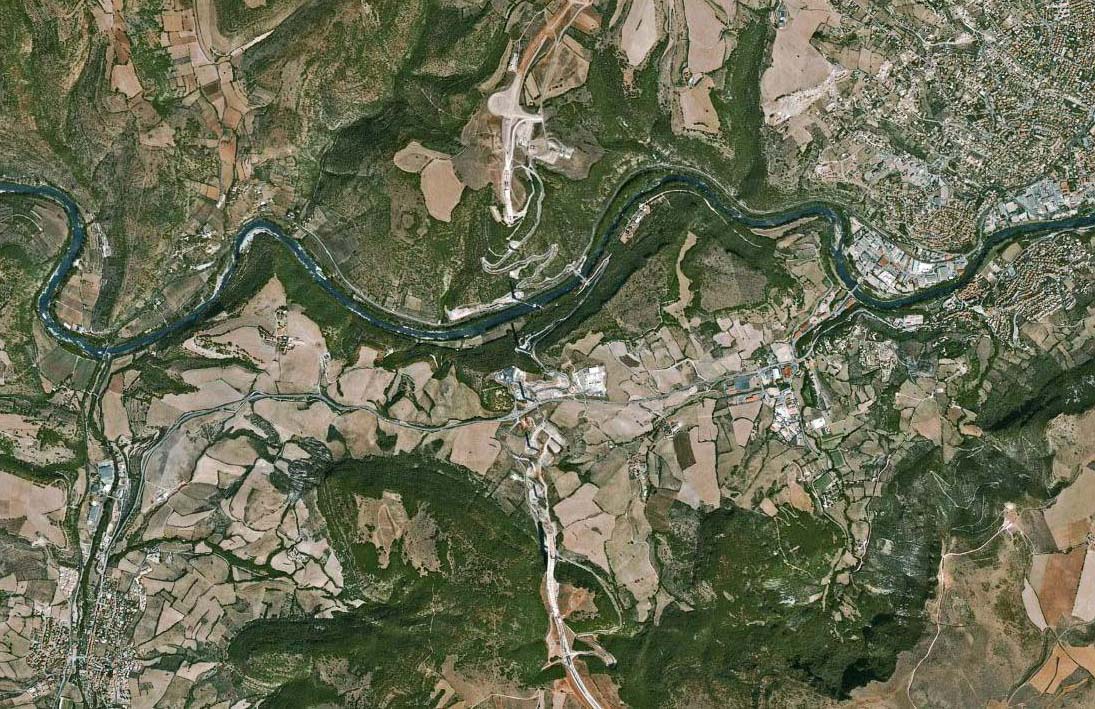 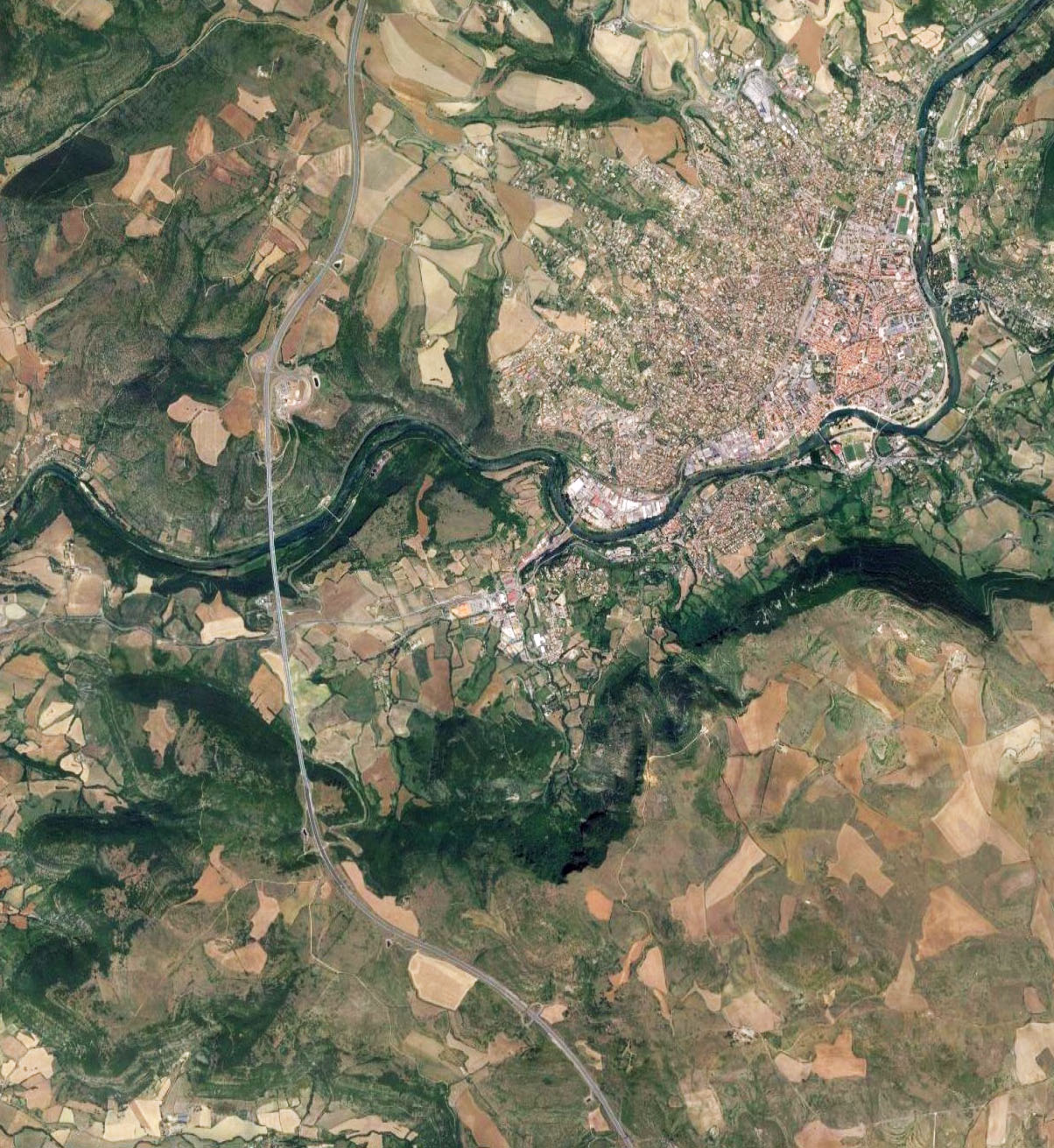 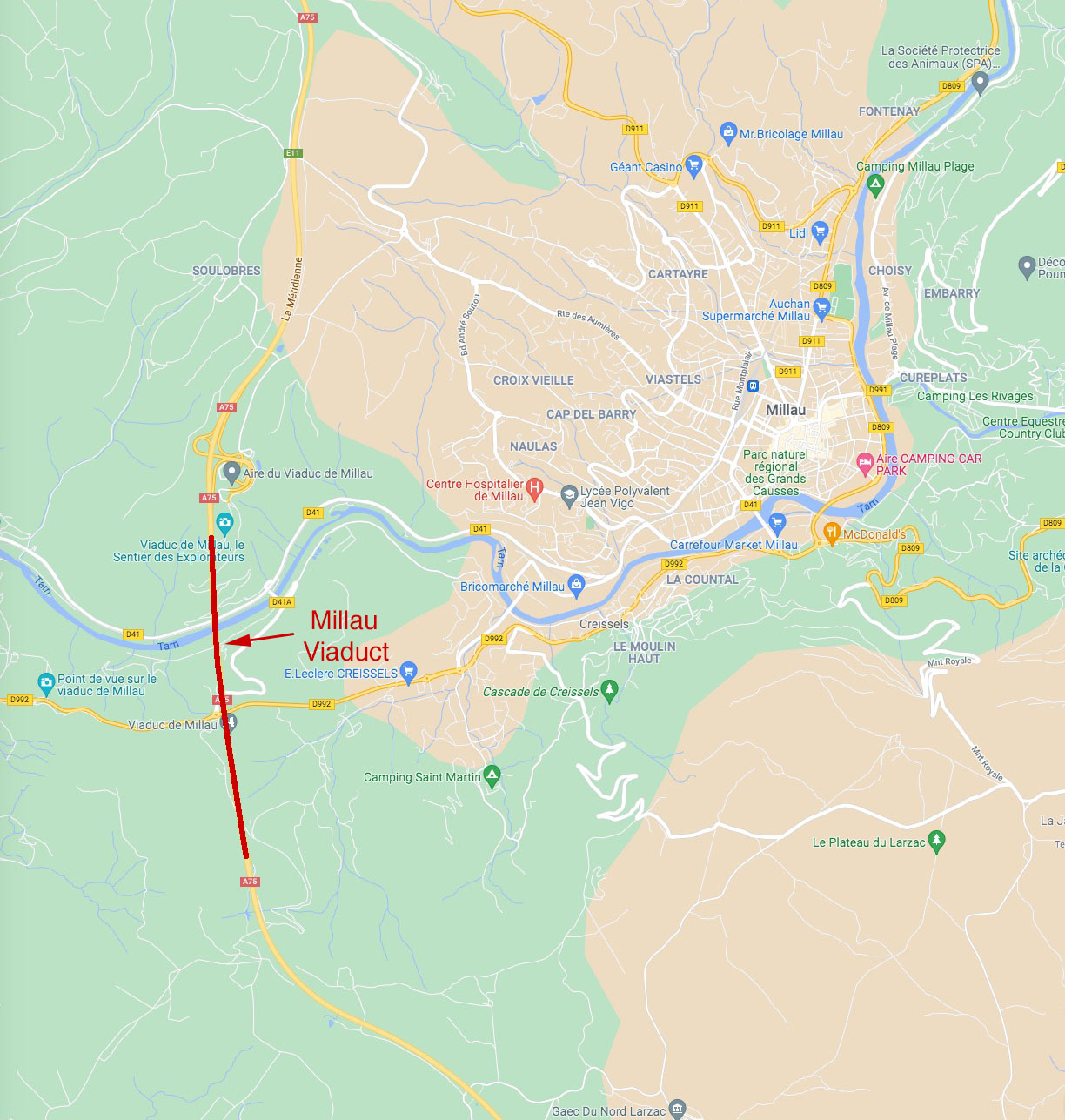 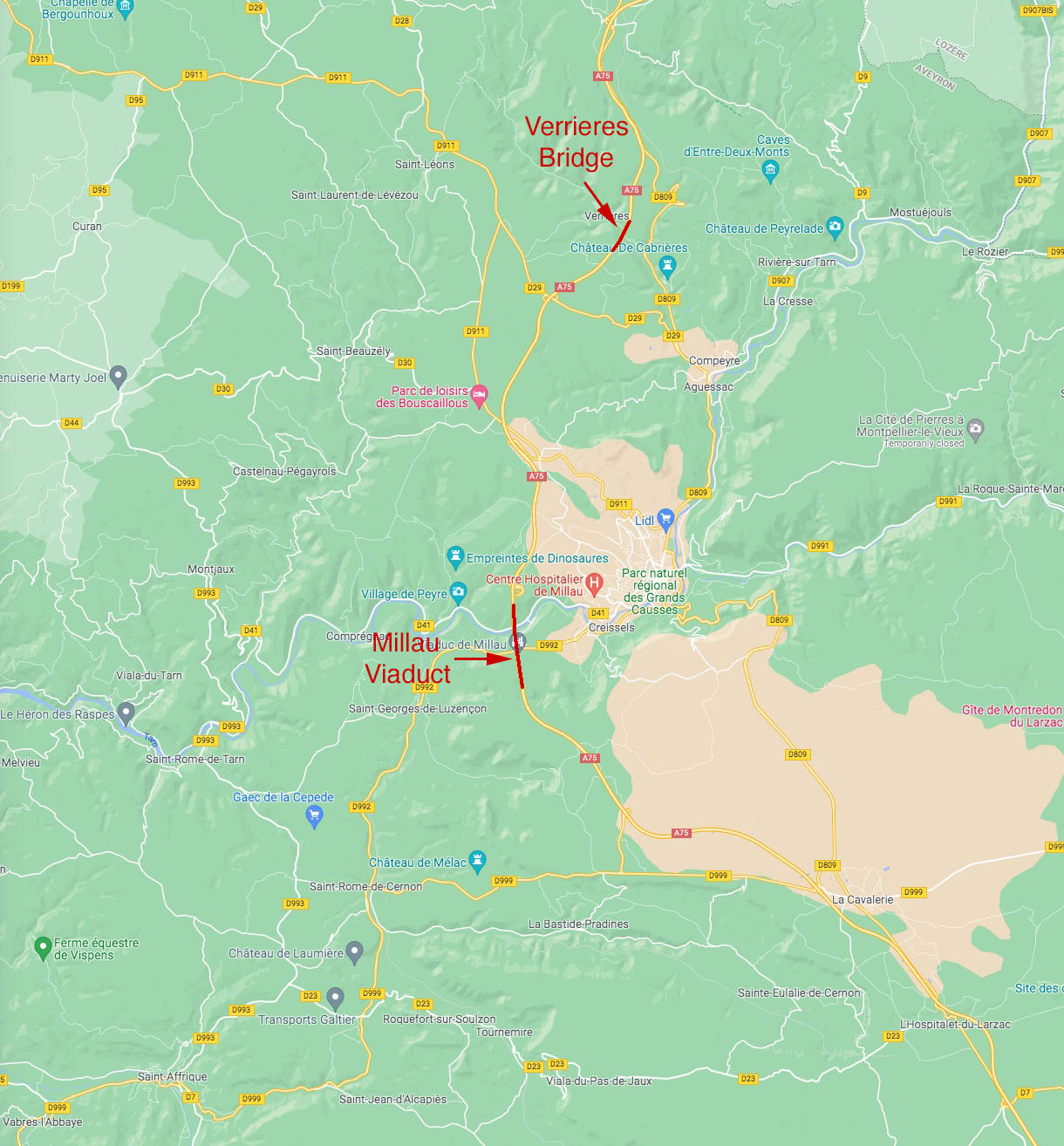