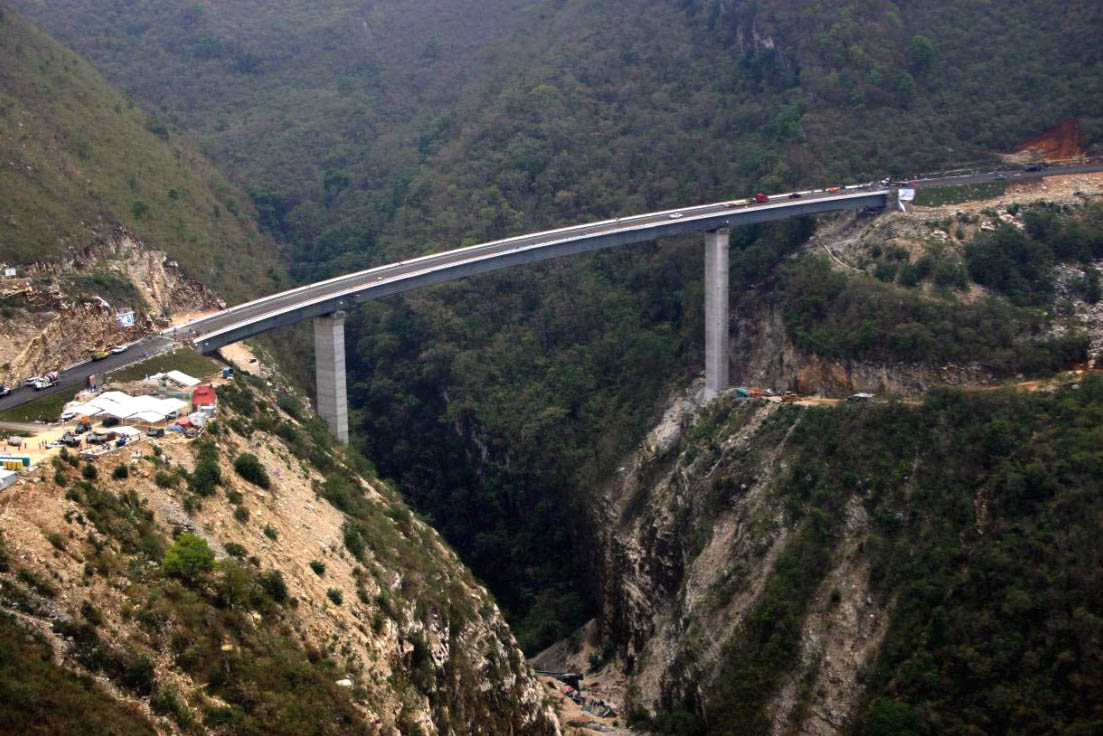 Currently the 2nd highest bridge in Mexico, the Puente San Cristóbal crosses a deep crevasse on the new San Cristóbal-Tuxtla Gutiérrez highway that finally opened in 2006. Connecting Tuxtla Gutiérrez with San Cristóbal de las Casas in Mexico’s southern state of Chiapas, the modern 2-lane toll expressway bypassed a winding mountain road of tight curves and endless switchbacks. The bridge earned a permanent place in the Mexican engineering history books when half of the main span box beam completely collapsed into the canyon on October 24, 2004 during the final phase of its construction.

The superstructure of the San Cristóbal bridge consists of three spans of 238 feet (72.53 mtrs), 584 feet (177.94 mtrs) and 238 feet (72.53 mtrs). Two concrete piers approximately 200 feet (61 mtrs) high support the roadway. The road has a 10 percent bank as it curves 656 feet (200 mtrs) above the Arroyo Chentic. The central 331 feet (101 mtrs) of the main span is composed of a steel orthotropic deck while the rest of the main span and the side spans decks are made of a prestressed concrete slab. With no ground available to put up temporary falsework, engineers had to build the main span by cantilevering the two 295 foot (90 mtr) halves out from the piers. Beam bridges are always at their most vulnerable just before the two halves are closed in the center when the bending forces are at their greatest. A continuous curve only complicates things further since the span is more likely to twist or bend sideways as construction progresses. According to the official accident report, a horizontal displacement of 20 centimeters combined with an earthquake of 4.0 created vibrations and movement strong enough to bend the incomplete span and that neither the designers or the construction team was at fault.

Whatever the reasons for its collapse, the entire structure was rebuilt and after a delay of more than a year, opened in May of 2006. The completed San Cristóbal bridge is designed to handle earthquakes as strong as 8.0. The subtle curve and clean lines of the graceful bridge are accentuated by 6 rows of horizontal flanges that run alongside the green box girder. Puente San Cristóbal will remain the highest bridge in Mexico until 2012 when it is surpassed by 2 bridges: The Baluarte and San Marcos bridges. 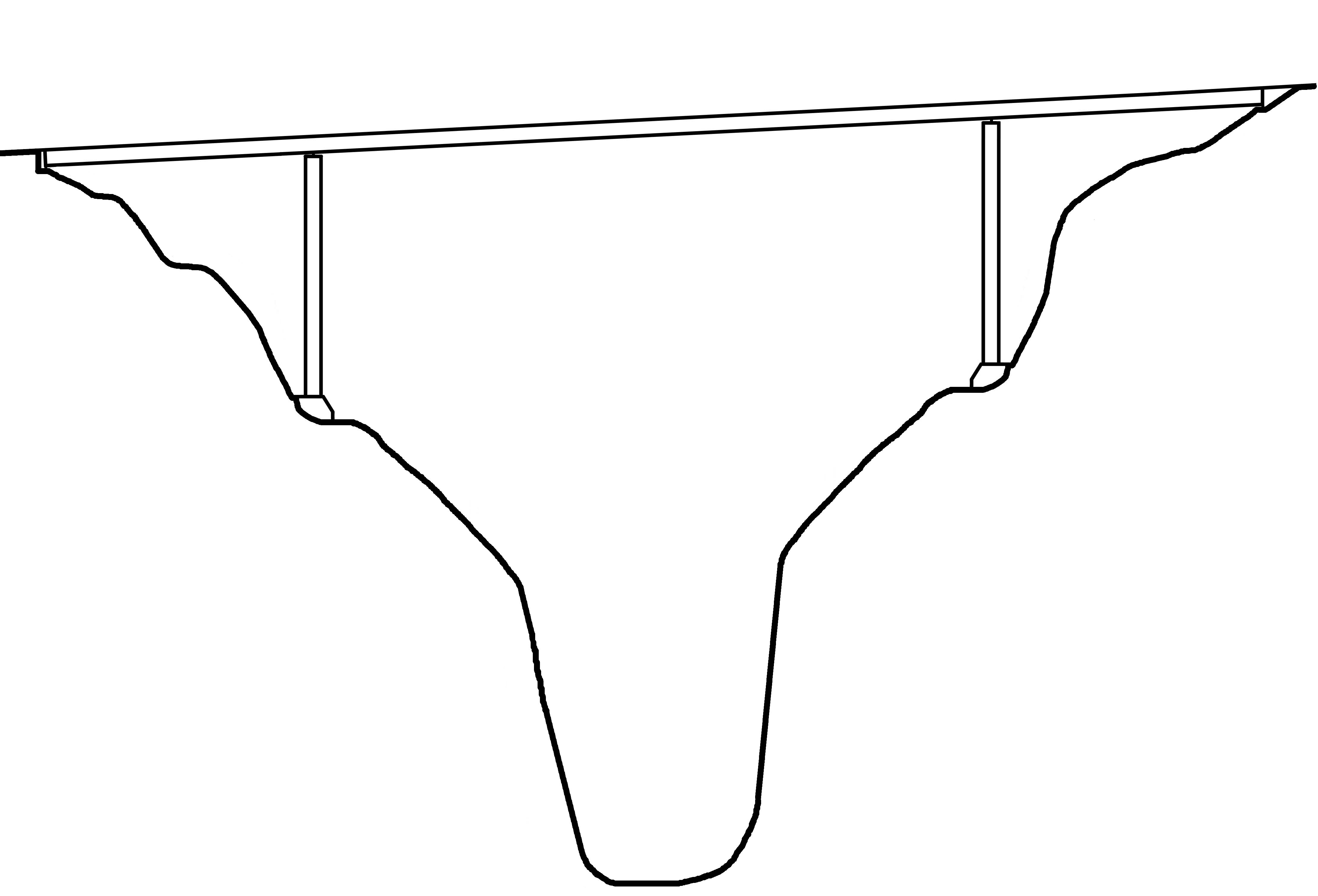 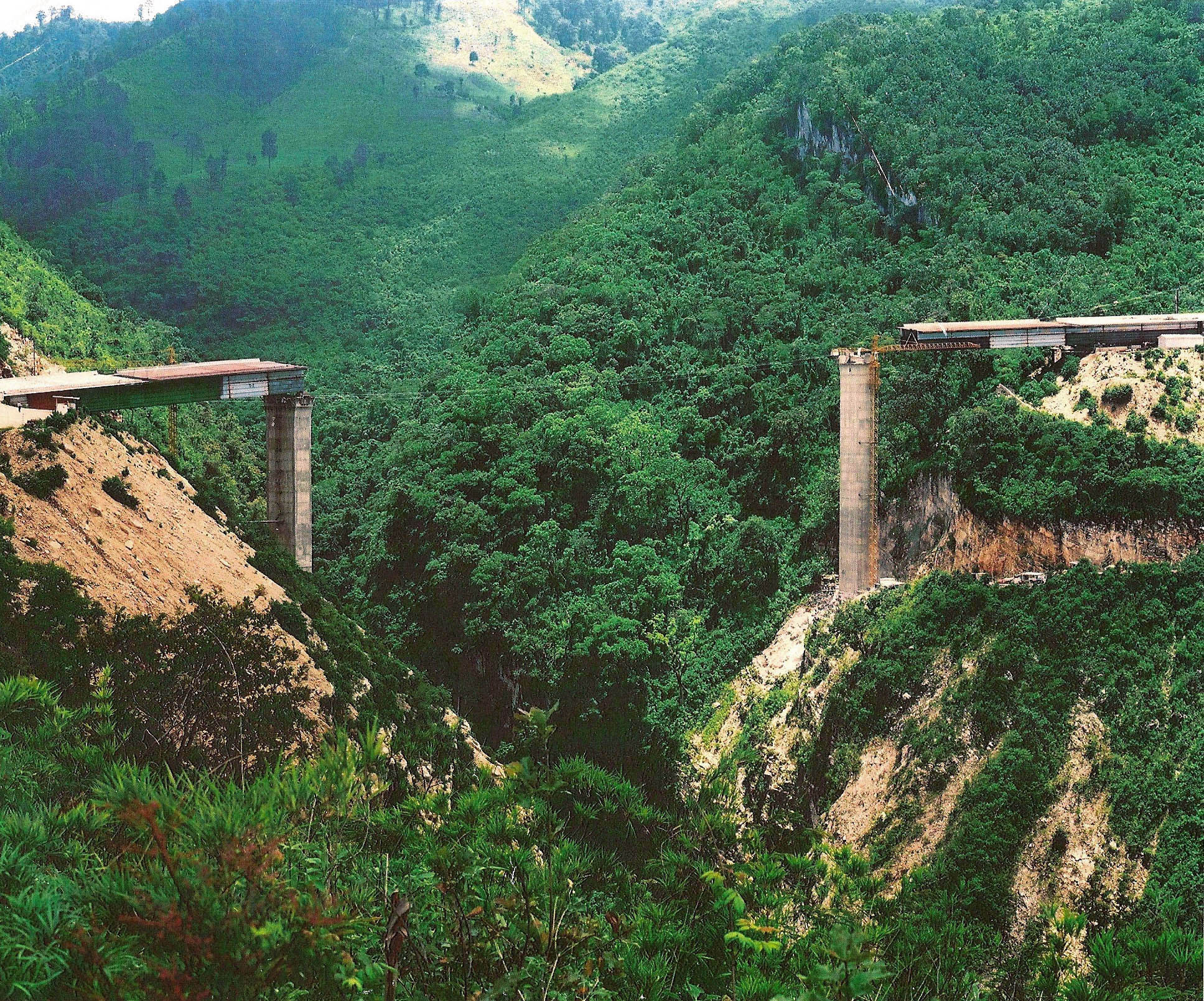 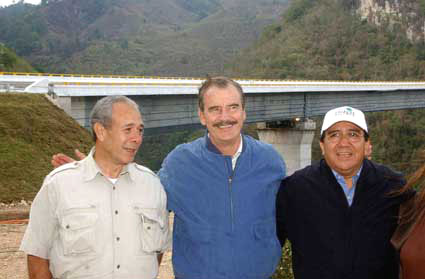 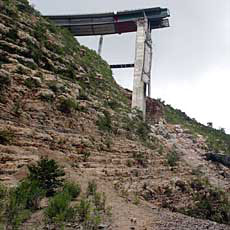 West side tower damage from the collapsed main span. 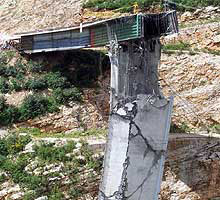 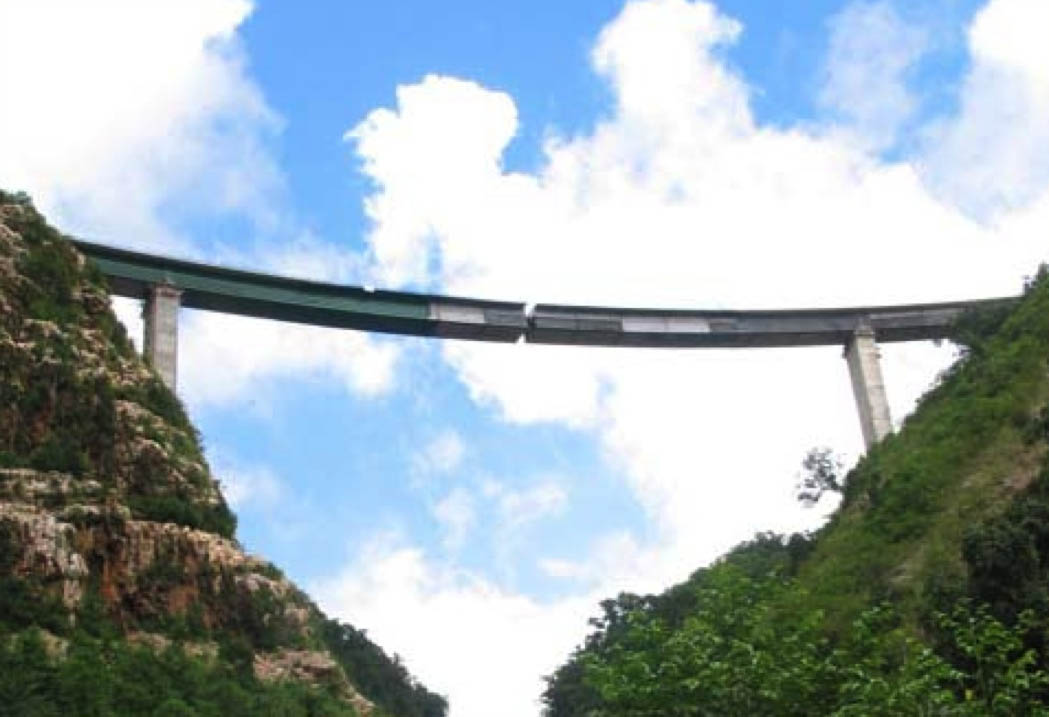 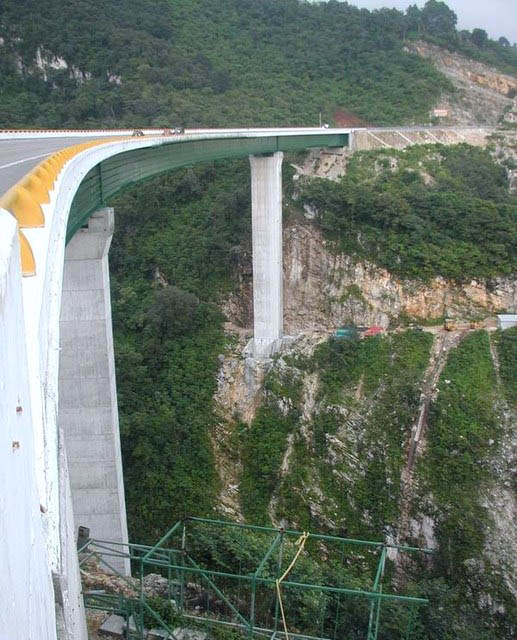 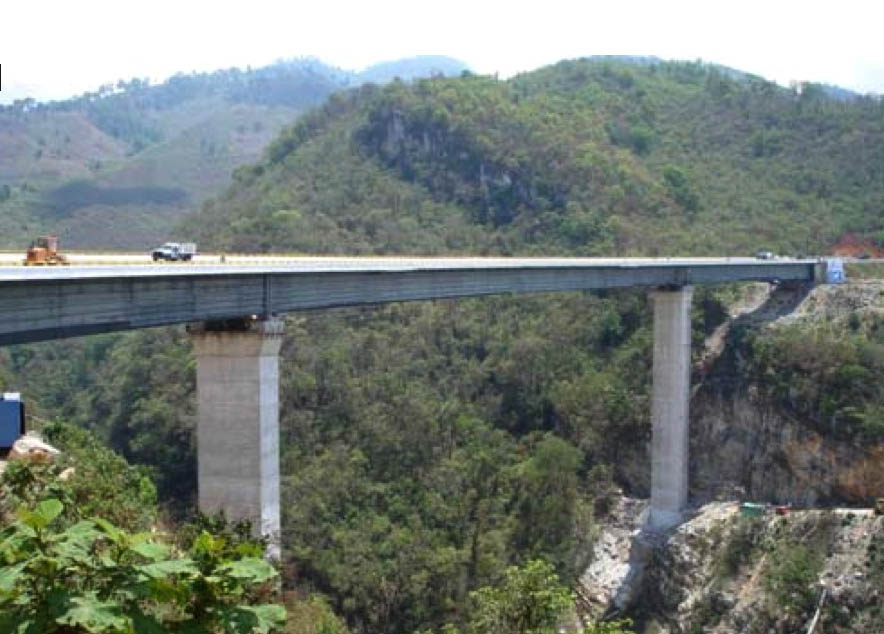 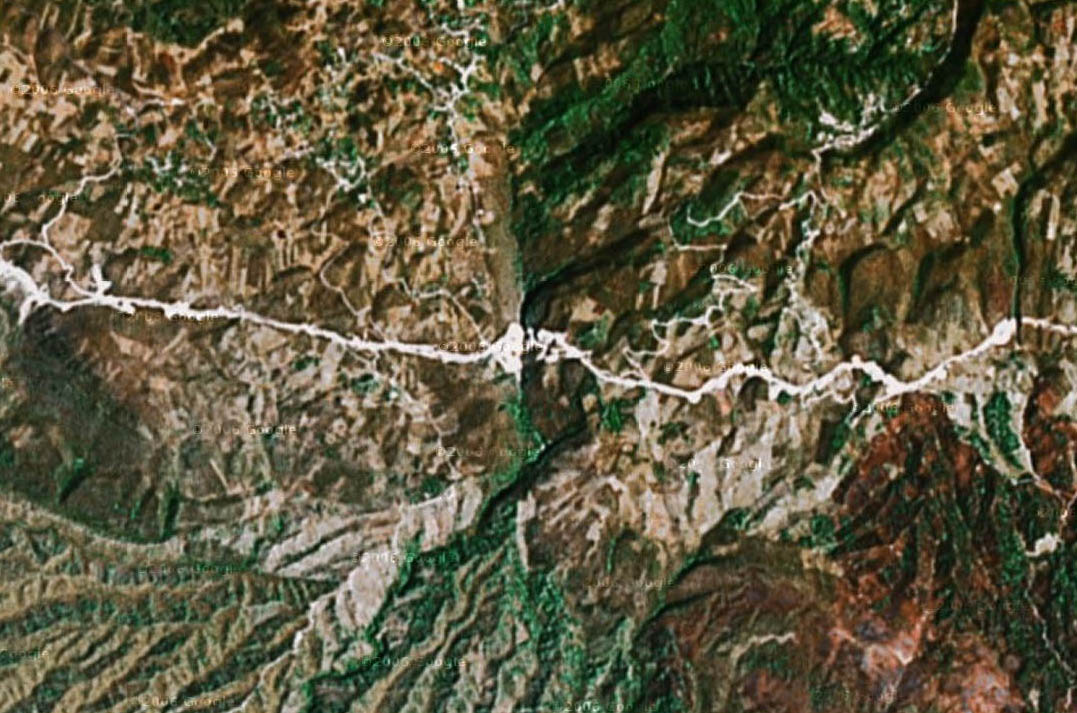 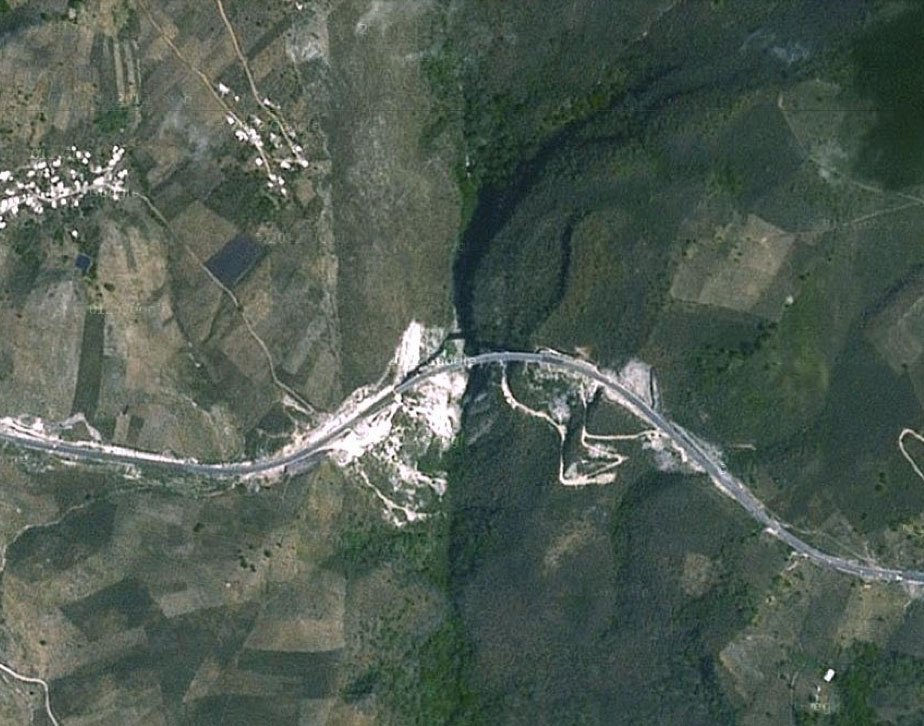 A satellite image after the bridge was complete. 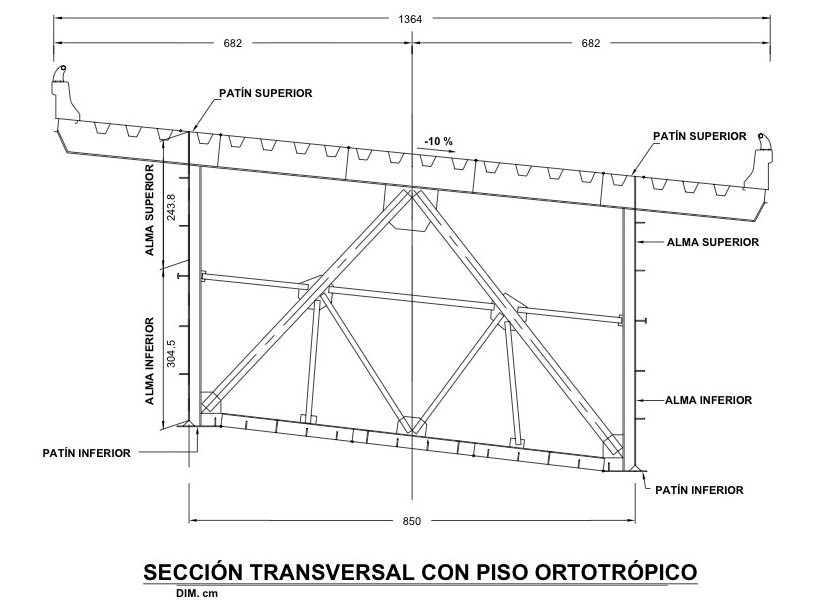 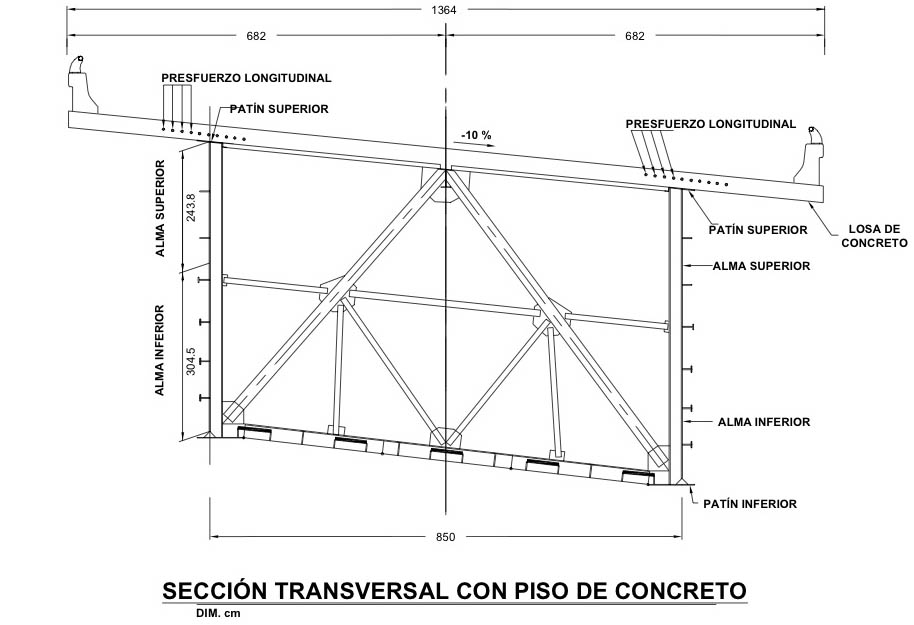