The highest railway bridge in Switzerland, the Sitter Viaduct (99 meters high) is like many tall railway bridges in Europe where large stone arch approaches give way to a long deck truss that sometimes looks a little out of place. Also located in St. Gallen and of the same height is the unusual one lane truss bridge Fachwerkbrücke Haggen-Stein. Also not to be missed down in the Sitter River valley below are several of Switzerland’s greatest covered bridges.

Constructed in 1937, the spindly looking Fachwerkbrücke Haggen-Stein (98.6 meters high) crosses the Sitter River just south of St. Gallen, Switzerland. The highest single lane road bridge in Europe, the continuous truss widens out several feet over two of the piers to allow cars to pass each other. The two sidewalks and roadway have a total width of just 11 feet (3.3 mtrs). Reaching a maximum height of 276 feet (84 mtrs), the A-frame piers look more suited to support power lines than a bridge. The design was by Rudolf Dick. Note the extremely rare perpendicular covered bridges directly below the viaduct. There are several other classic covered bridges in the Sitter River valley nearby as well as the Sitter viaduct - Switzerland’s highest railway bridge.

One of Switzerland’s classic railway bridges, the Wiesner or Wiesen or Landwasser Viaduct (90 meters high), is a masonry arch that was completed in 1909. The bridge has a main span of 180 feet (55 mtrs) and crosses over the Landwasser River. The bridge is located just south of Wiesen in the Grisons region of Switzerland. Just 3 miles (4.8 kms) further south on the same line near Schmitten and not to be confused with the Wiesen is the famous, curving 213 foot (65 mtr) high Landwasser viaduct. With one end terminating into a cliffside tunnel, this multi-span arch bridge may well be the most photographed railway bridge in Switzerland. 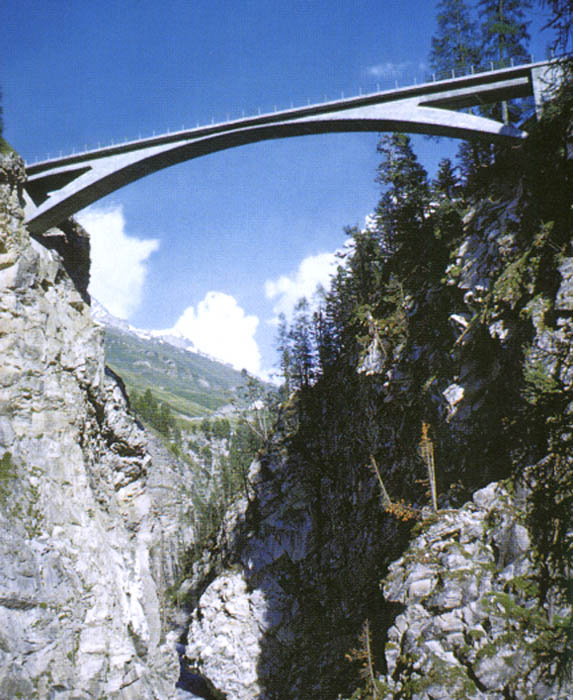 As a disciple of Robert Maillart, Swiss bridge designer Christian Menn continued his masters’ legacy of creating concrete arch bridges that are simple yet soaring, curvilinear yet conservative. A great example of this is the Averserrhein or Letziwald bridge (90 meters high). Leaping across a chasm in one span of 213 feet (65 mtrs), the arch echoes Maillart’s Salginatobel but on a smaller scale with just one spandrel opening on either side. The mass of the arch rib was kept light from a span to rise ratio of just 10 to 1. The bridge is located just east of Schiers.

Considered to be Swiss designer Robert Maillart’s greatest masterpiece, the Salginatobel bridge (90 meters high) is a 3-hinged concrete arch bridge with a span of 295 feet (90 mtrs). In an age when most bridge engineers were simply replacing stone with concrete, Maillart was taking advantage of the material and the endless possibilities it offered to make arches thinner, lighter and more organic. Several books and numerous articles have been written on Maillart and his reinforced concrete innovations. You can read about him here: http://en.wikipedia.org/wiki/Robert_Maillart

Another Swiss railway bridge in a picture perfect setting, the Solis bridge (89 meters high) crosses a deep gorge for a tram railway line near Solis. Like so many arch bridges of the time, the timber centring used to temporarily support the 138 foot (42 mtr) arch during construction was as much a work of art and engineering as the bridge itself. The asymmetrical arch ribs drop down approximately 33 feet (10 mtrs) lower on the northeast side of the span. Two other high Albula River road bridges (83 & 75 meters high) are located on either side of the railway bridge. One is an arch bridge built prior to the railway span while the other is a steel girder frame bridge built many years later. Does anyone know the construction dates on these two other spans? 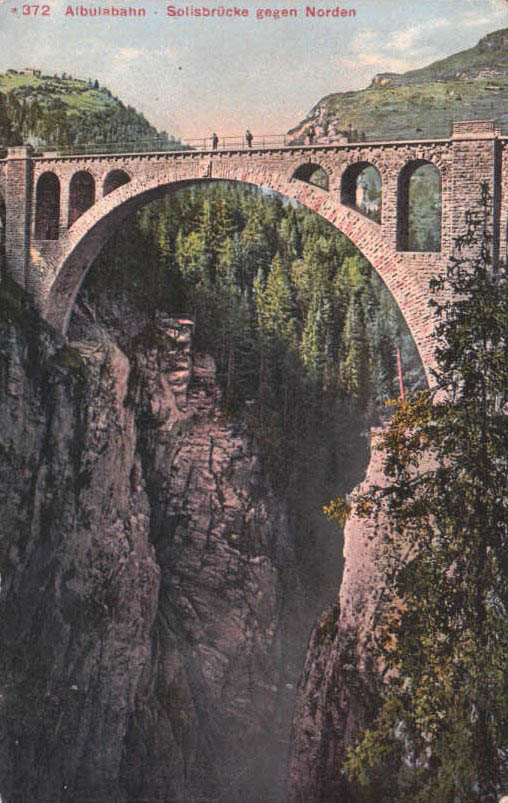 Designed by Switzerland’s famous bridge engineer Christian Menn, the Pont Veveyse (85 meters high) was one of his earlier designs having been completed in 1969. Located in the city of Vevey on route 9, the curving viaduct offers spectacular views of Lake Geneva. A steel box girder forms the backbone of each of the twin viaducts - one 4 lanes wide and the other 3 lanes wide.

The highest railway bridge in the world at the time of its completion in 1862, the Grandfrey Viaduct (82 meters high) was originally a lattice truss bridge with 5 spans of 160 feet (48.8 mtrs). In 1927 the viaduct was completely rebuilt into a concrete arch structure, retaining the same pier locations and span lengths.

With the Matterhorn mountain on one side and a 328 foot (100 mtr) waterfall on the other, few bridges can match the Findelenbachbrücke (75 meters high) for its spectacular views. This is no coincidence as the bridge is part of a mountain tram railway that travels from Zermatt up the slopes of Mount Rosa to a point where the Matterhorn is so close you can almost touch it. Completed in 1898, the 3-span bridge is nearly as tall as it is long with two masonry piers supporting a small central arch 92 feet (28 mtrs) long and two side truss spans. Some reports put the bridge at 90 meters in height but with a main span of 28 meters, the bridge is not likely more than 246 feet (75 mtrs) high.

Beginning in Zermatt at an elevation of 5,250 feet (1600 mtrs), the tram gains nearly a mile of altitude until the end of the line at Gomergrat at 10,171 feet (3,100 mtrs) near the top of Mount Rosa. The single track cog line has been electrified since the day it opened more than 100 years ago. There are two hotel stations along the route including one with a 5 star rating! The Gomergrat Bahn is part of the larger BVZ Zermatt-Bahn - a narrow gauge railway that runs from Brig to Zermatt. There are no roads to Zermatt - you must take the bahn which runs year round. Find out more at these two websites: http://www.ggb.ch/home/index.php and http://www.bahnen-und-mehr.de/ch_bvz.htm